How to hold your newborn: Ben Cohen's 'Cuddle Mastery Guide

by the editorial team Published on 21 September 2013 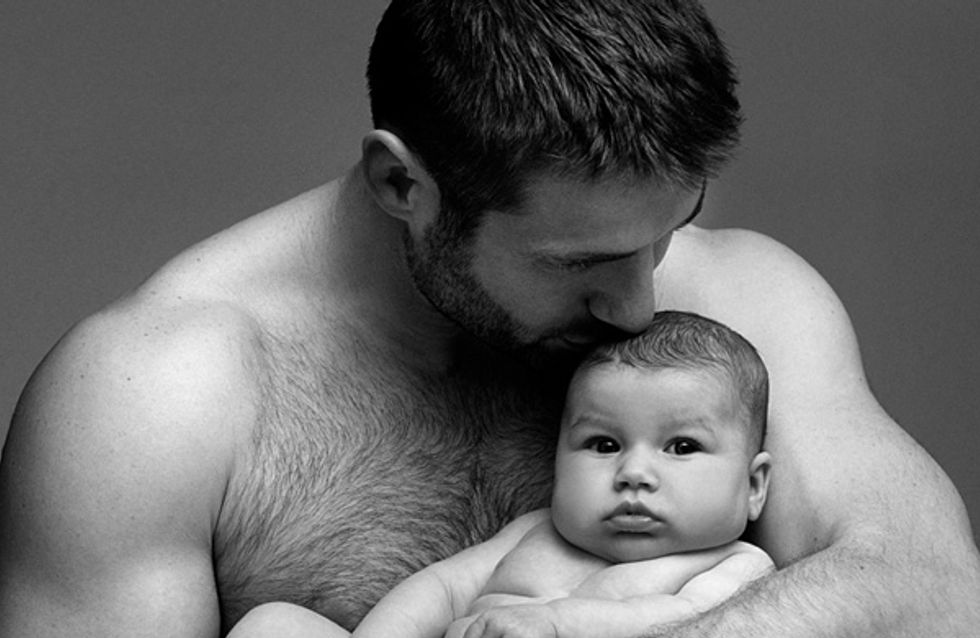 Former England rugby star Ben Cohen is currently starring in the latest series of BBC One's Strictly Come Dancing. The sporting icon - also known as the 'David Beckham of rugby' - seems to be taking to the dance floor like a duck to water, just as he was when he became a father to his twin daughters Harriette and Isabelle. Before his stint on Strictly, we sat down with Ben to talk about being a dad and why it's absolutely essential you spend lots of time cuddling your newborn babies...Awww!

It can be intimidating when you become a parent for the first time. You’re suddenly responsible for this tiny, defenceless little person and their life is literally in your hands. But help is at hand – father-of-two and former England rugby player Ben Cohen has teamed up with Persil Non-Bio and Comfort Pure to create the ‘Cuddle Mastery Guide’. We caught up with him to find out more.

Endorsed by the British Skin Foundation, the aim of the Cuddle Mastery Guide is to offer practical parenting information and give new parents – especially fathers – confidence in how to cuddle, comfort and soothe their little ones.

What inspired you to take part in the ‘Cuddle Mastery Guide’ showing new parents different ways to cuddle their newborns?

Because I like cuddling! The reason why is actually because when my two girls were born, I realised the importance of embracing your children and cuddling them. That’s the way you show your kids love. And I was attracted to the core values of the Cuddle Mastery Guide – it’s about parents having the best possible relationship with their children.

Were you worried about cuddling your twin daughters Harriette and Isabelle when they were born?

I think so – it’s only natural as they look so tiny and look so fragile. At first you’re worried about handling them, but you don’t realise how durable they are. Soon you’re wrestling with dressing them and putting their tiny chubby arms in tops and you’re suddenly not so scared. Also having twins was definitely a steep learning curve! Every day brought new challenges because they are changing and growing, but at the same time they don’t yet have the communication skills to let you know exactly what they need.

How long did it take you to get comfortable with them?

I think it’s pretty quick. For me it was very much about getting stuck in – getting their bottles ready, changing their nappies and really being hands on. You have to learn, but you learn on the hoof. You start to understand the babies’ needs and quickly get into a routine with them.

What measures – if any – did you take to prepare yourself to be a new dad?

We read plenty of books to learn the essential stuff, but we didn’t go antenatal classes or anything like that because we knew it was going to be a Caesarean birth as we were expecting twins. Although you can be prepared, I still think it’s something you have to learn on the job. We were organised and had everything we needed, but nothing can prepare you for what it’s like when they actually arrive. They hand them over and you think: ‘Right, ok, so what exactly do we do now then?’ You just have to pick them up and you learn how to hold them very quickly. Luckily instinct kicks in.

What was your favourite way to cuddle your newborns?

Well we had twins, so I had to learn to manoeuvre two babies! But at that age they’re very transportable so it wasn’t too bad – I could put one in each arm. It’s when they started to walk I had to keep my eyes on them all the time, they’d run in opposite directions and you think: ‘God where do I look, which way do I turn first?’

Did your rugby-playing skills come in handy?

Yes I would dad-tackle them! No but really, they can disappear so quickly, which makes you worried. Especially in public places, so you always try to keep them in the pram if possible. Our pram is like an articulated lorry anyway, because it’s a double pram. So you end up in the supermarket taking half the aisle with you. I don’t know how many times we’ve had things attached to us when we’re walking out the door and not realised.

Do you and your wife have specific parental responsibilities?

No I don’t think we could afford to – we live on a farm and we have two kids and we lead a very active life. I work and my wife works, so everything is based around our kids and that’s how things work for us. So we both have to be hands-on when needed, and I want to be and she wants to be and we enjoy looking after our kids. Now that they’re older we take them to horse-riding classes, gymnastics and ballet lessons. I love spending time with my kids and so does my wife – we just want to be around them and share in their experience of growing up.

What did you find the most challenging thing about first being a dad?

In the first year sleep deprivation, most definitely, having an active job and no sleep was very difficult. The weight dropped off me very fast and I didn’t have an appetite. I was running on average about 10km a day in rugby training and then I had matches at the weekend, but I was getting no sleep. It’s amazing what the body can cope with though. Out of all of it, that was probably the most challenging part of becoming a dad. But also one would get a cold and then the other would get it, or one couldn’t sleep and so the other wouldn’t either.

Do you have any tricks for soothing a crying baby?

If they’re upset, teething or colicky, or just uncomfortable, usually what they want is attention. They want that intimacy, love and attention. A cuddle is a natural soothing remedy for most problems, although obviously not if they want feeding or a nappy change! We found that with our girls picking them up and giving them a cuddle, and talking to them so they can hear your voice, worked wonders to soothe them. It’s that skin-to-skin contact and feeling the beat of your heart. There’s nothing like being cuddled.

What is the best advice you would give new dads / dads to be?

To get involved! I think that traditional views that the mother has an intimate and close relationship with the baby while the father goes out to work is out-dated. I took an active role in looking after my babies and I’m so glad I did. I think it’s really really important to establish that close bond with your kids from the get go. I also think it’s essential to share responsibilities, because it also enables your wife to be able to take a break and take some time for herself. And you need that one-on-one time with your child. But mainly don’t be nervous, as a father I know it can be intimidating when you first meet your little one, but fatherhood will be one of the best experiences you will ever have.

Rugby star and dad of two Ben Cohen has teamed up with Persil Non-Bio and Comfort Pure and the British Skin Foundation to launch the ‘Cuddle Mastery Guide’ for new parents. Visit www.facebook.com/comfortzoneuk to find out more.