Beth Tweddle found herself at the centre of Twitter abuse when she was invited to do a real time Twitter chat on SkySportsNews. From the inane to the insulting the Olympic medallist was attacked with misogynist comments and questions. Our favourite no nonsense feminist campaigners, Everyday Sexism picked up on this straight away - to name and shame the men behind the abuse.

It's no secret that there's a hell of a lot of sexism out there, but sport is one of those areas where women seem to have a rougher deal than ever.

Aside from the fact women in sport are given a nanosecond of media coverage in comparison to mens sports, they're also constantly threatened by small-minded sexism.

And if we needed a reminder (we didn't) that there's still a lot of attitudes left to change, then SkySportsNews accidentally gave us one.

Their live twitter chat with Olympic gymnast Beth Tweddle was sabotaged by sexist comments and questions belittling her talent, achievements, appearance AND sexualising her answers. ​We'd roll our eyes if we weren't so frigging furious. 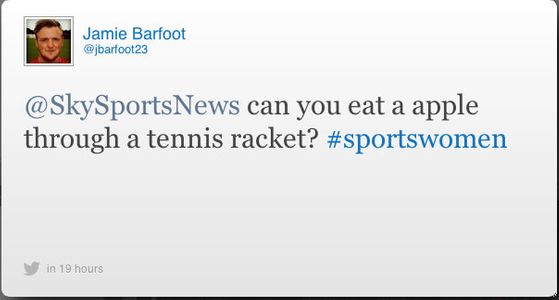 Everyday Sexism did a champion job of showing up all the abusive tweeters with their powerful presentation. Let's make it go viral!

Mad, unsurprised or amused? What do you think about the tweets Beth received? Tweet us@sofeminineUK

Ursula Dewey
…
For all the best videos, memes and shareable news!

Sexist comments? Save it. Here's the best ball-busting comebacks ever