From the Office to The Pole: Confessions Of A Part-Time Stripper 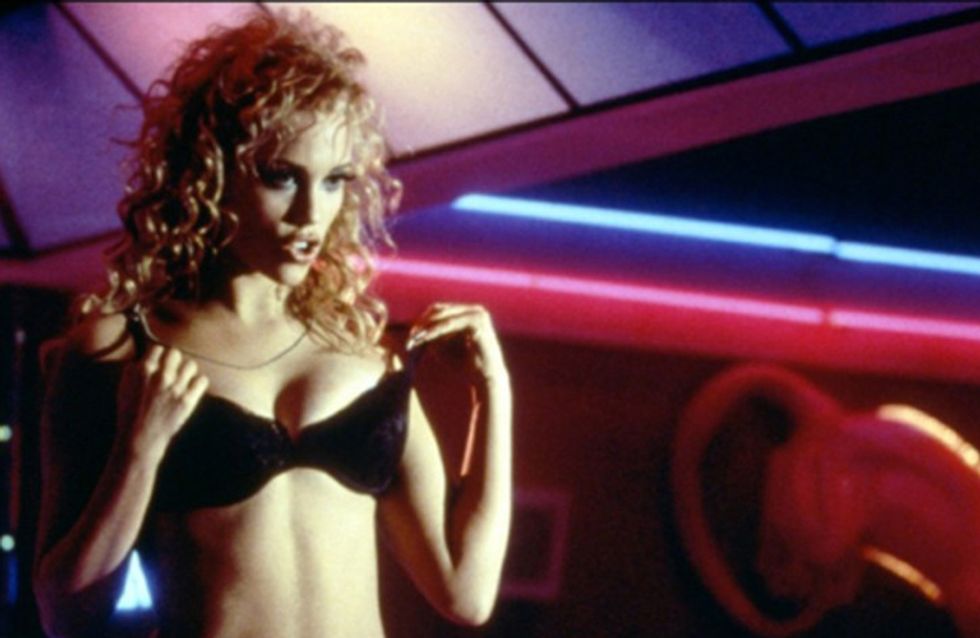 A.A. Jones works at a corporate job. What she does and where it's located, she won't say. Why? Because she works as a stripper too, entertaining newbies and regulars, including one who flies down every few months just to catch her show. She's also a yoga guru, performance artist, and a self-respecting woman who gets confidence from the pole. She had a lot to say, and I had a lot to learn.

A. A. Jones was thirty years old and married when she danced for the first time on stage. She and her now ex-husband had chosen a high-end club in Los Angeles for her debut in 2009.

​Although they were holding down several jobs between them, they were still struggling and "it was always about, y'know, how can we make an extra hundred dollars this week?" she recalls in our interview. "I said to [my husband], 'Look. I studied performing arts in Germany. I know how to dance. Let's check this out!'"

Jones holds more than just a degree in performing arts. She's a certified yoga teacher and a fitness and pilates instructor. She had also studied pole dancing for three years before proposing the idea of stripping to her husband to stay afloat as the economy floundered.

​Together they had decided that she could work "maybe once or twice a week." For extra pocket money, sure, but also "to fulfill our American Dream of being financially secure," she says.

​As I listened, I realised her motivation for entering the exotic dancing industry mirrored the same motivation I had when I graduated college in 2011: green-horned and ready to lock down an entry level job that wasn't too deadening in the dogged pursuit of a future life free of constant worry over money.

So back in 2009, when Jones had found the club where she felt most comfortable, she selected Bring Me to Life by Evanescence and Turn the Page by Bob Seger as her performance music. Her ex sat at the bar watching her, along with many other patrons. When it was her turn to go on stage, nervous and scared, she thought, "I don't know. Can I really do it? Can I take my clothes off?"

In that moment she remembered her free-spirited upbringing in Croatia, where she spent a lot of time in her birthday suit running into the Adriatic Sea.

"I had been bathing naked my whole entire life," she remembers, laughing. "So I talked myself into it. I'm like, 'I can do this. There's nothing wrong about this. We were all born naked.'" Ten minutes later, Jones became a professional exotic dancer. "At the end of my set, I had discovered that I loved being on stage, being mesmerizing. I loved people watching me. I didn't even know I was butt naked."

I ask if there was ever moment when she regretted her decision to dance. If she, years later, had the sinking feeling that maybe she had made a mistake. After all, she had lost one of her jobs because of it. "An article [about dancing] in L.A. Weekly came out, and the next day I was let go from one of the facilities," where she worked as a fitness instructor. "I have no regrets," she replies.

Despite her overall positive experience in the industry, she's also had to deal with the dark side. "Yes, I have been violated. Not, y'know, terribly, but there have been times when I'm like 'Oh! He just touched my butt!" It's illegal to touch a dancer in L.A.

She's also aware that because of her dancing, other people, particularly women, immediately assume she's a "dirty girl" and a threat to their relationships. Oddly, dancing did unravel her most important relationship. Her ex-husband was supportive at first, happy to count the cold hard cash at the end of Jones' night, but couldn't handle the realties. "It's like that expression 'What happens at the club stays at the club.' He couldn't handle it," she finishes succinctly.

While she admits that her co-dancers may drink, smoke, and snort coke to get through their shifts, her coping mechanisms are a bit more conventional - taking care of her body through exercise and healthy eating, caring for animals, and writing.

​"I eat a 90 per cent clean diet but do not include any red meat in my diet due to ethical reasons." Again, animals are Jones' passion; she owns five dogs. "I try to fill my day with lots of vegetables and fruits, [and] I occasionally do eat meat (turkey) and dairy but only what is naturally sustained and organic."

She doesn't drink alcohol either, but she does have one weakness: "Sweets!"

Exercise-wise, Jones is lucky. Almost every source of physical activity she does comes with a paycheck. Along with stripping and teaching fitness classes, she "walks other people's dogs" as well. She still attends a pole-dancing class "to learn new tricks" despite being incredibly skilled already.

She calls the dancing industry "The Maze of the Male Underworld" where she claims she's constantly on guard for touchy patrons, "club bullies," (i.e. overly competitive dancers who make her life a living hell), and dealing with the long hours. She does take her job home. No, she's never dated a regular and never will, but "it's not like I [leave] the club and never want to think about it. No. I think about them."

Surprisingly, like any other work scenario, Jones considers the other dancers simply co-workers who she doesn't have to hang out with outside of the office. After finishing her corporate job, she arrives at the club at 8PM, make-up already applied, and a dress on over her skimpy outfit because "I do not walk around in lingerie on the floor," she says. "I only reveal my body on stage."

She knows she's an anomaly - sober, spiritual, extremely athletic, and highly professional. In order for a stripper to maintain ownership over her body, Jones emphatically says that "you need to know how to run your business. I'm my own boss."

​Unlike what sensational shows and movies may tell us, Jones is empowered by stripping. Yes, "men do come to be aroused," but dancing satisfies her "womanly urge" to be sensual, and men respond to her confidence with respect and total appreciation for her body and her physical prowess.

When she first started, Jones was clearly dancing for the money. Five years later, Jones is now dancing for herself.

To learn more about A.A. Jones' journey from the office world to exotic dancing, buy her memoir, Diary of a Virgin Stripper, which won the 2013 Readers' Favourite Book Award. A.A. blogs regularly.