These Are The Women Inspiring Us In 2016

by Pascale Day Published on 8 January 2014 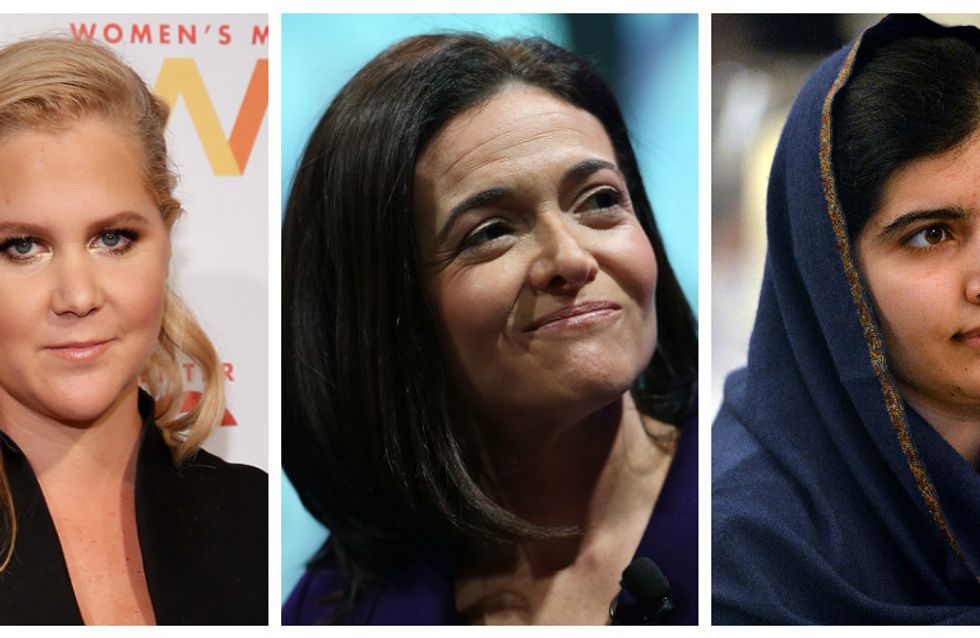 A good impression can come in a variety of different forms. Perhaps it's a big gesture or a simple act of kindness that make us stop and say, 'You're a good soul." There are plenty of women out there who constantly impressed us in 2015, and no doubt will continue to do so in 2016. Here are six stunning women who make us want to be a better person in life.

2015 was The Year of the Woman, with many female personalities making ​​the headlines in all the right ways, and an emergence of relatively unknown women whose selfless actions have put them in the spotlight. But the reality is that all women are inspiring. And this is an idea that Susan Sarandon, our Editor in Chief for the day, sums up best:

"I admire all women," said the actress and L'Oreal muse, "I think women are extraordinary. They are the glue that holds everything together, for their families and for themselves. Many women that I admire in life are heroines who accomplish the impossible through their imagination and strength, but are not celebrated in public."

Like Susan, we think it is important to stop and value the heroines making our world a better place, but as there's so many good gals out there, we've selected six female powerhouses to keep an eye on this year. Girl. Power.

As Director of Operations and Zuckerberg's right hand (wo)man, Sheryl Sandberg took control of the boat when it comes to maternity and paternity leave. This is one business woman who knows what she wants and fights as much as she can when it comes to the role of women in business. Even when hit by a terrible misfortune (her husband died suddenly in last May while they were on holiday with their two young children), she didn't lose her fighting spirit. On December 29 2015, she wrote a poignant message on her Facebook account by explaining that for 2016, she had made ​​a resolution: write every night before bed three happy moments of her day, because, as she says, "happiness is the ultimate act of provocation."

The story of Joy Mangano is somewhat extraordinary. As a young mother and divorcee in the 90s, she had just one wish: to improve the lives of those around her. And so she developed her invention: the self-wringing Miracle Mop, a device that prevents the user from getting their hands wet and preventing injury caused by bending over to wring the fibres. Her invention was a tremendous success. The result? From humble beginnings, she is now a self-made business woman whose impressive career has even inspired one of the most anticipated movies of the moment: JOY, directed by David O Russell, is out now and stars lady of the moment J-Law in the title role.

Karly Loyce became the face of Céline last summer and is now one of 2016's most promising models. Starring in Kenzo's new campaign and featured in i-D magazine's special 35th birthday edition, she's in high demand right now. And if the French beauty decides to pursue a career in fashion, then she has the brains to back it up: she's currently finishing off a degree in biology. This girl has it all!

Most of us know Jessica Alba as an actress, but in reality she is much, much more than that. In 2011, the star and mother of two started Honest, a company that sells organic products for babies. A force to be reckoned with, Ms Alba topped the ranking of the richest self-made entrepreneurs in the United States last year by Forbes, and in December received an award for Honest's commitment to the well-being of families. Part of the profit is donated to a charity devoted to children - one of the foundations it supports, Baby2Baby, came to the aid of no less than 100,000 children last year.

Indeed, Malala has inspired us for quite some time. But in 2016, the fight that Malala Yousafzai has been conducting for several years will be focused on the big screen thanks to a documentary directed by Davis Guggenheim, entitled "He called me Malala". Through this, everyone can (re) discover the story of this astonishing young woman who survived an assassination attempt by the Taliban while she was on her way to school. Since that day, she has received a Nobel Peace Prize and continued to fight ceaselessly for women's rights and the education of young girls.

She made a big impact as one of the strongest, funniest female personalities of 2015, and it's likely that she will continue to make a similar impact in 2016. Let's be honest: no introduction is needed for Amy Schumer. Comedian, actress, writer, and all-round bad-ass, Schumer doesn't hesitate to break the rules when it comes to how a woman in Hollywood should act; from constant inappropriate jokes and her subversive feminist sense of humour, she is single handedly redefining beauty standards, and showing that you can still be super hot even if you're not a size 8.

With the huge release of Trainwreck last year, Amy's only just getting started: brimming with projects for the coming year, the 34-year-old tour de force is about to become the first female comedian to play at Madison Square Garden. No wonder she was chosen by Annie Leibovitz to appear starkers for the 2016 Pirelli calendar, which this year decided to take a different approach and honour inspirational women. We love you Amy!

Which woman have inspired you so far this year? Let us know! @sofeminineUK