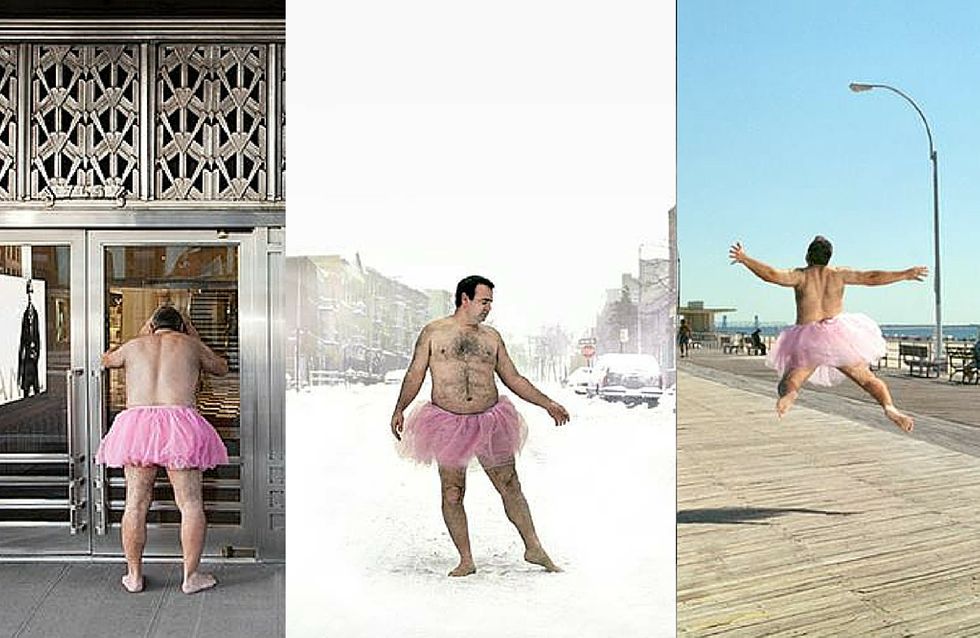 When Bob Carey's wife was diagnosed with cancer in 2003, he wanted to find a way to support his wife whilst also making people laugh. For him, The Tutu Project was the perfect way to do this. Since then, they've launched the #Dare2tutu hashtag to spread awareness and raise money.

When Bob's wife Linda was diagnosed with cancer, he didn't think twice about where his project would manifest itself. As a photographer, he knew it would have to be photography-based: "That's what I do when things are getting hard. I start making photographs," Bob explains. But after many years behind the camera, it was time for Bob to be in the spotlight. In a pink tutu. Yeah, you read that right. In fact, here's Bob at Times Square:

FOR THE FIRST TIME... #UdderlySmooth with #TheTutuProject in Times Square! Such a fun day! pic.twitter.com/I8O6ASZWJ3

And thus The Tutu Project was born. It all started in 2003, with Bob, a rather hairy fellow, being photographed in beautiful, picturesque locations, wearing nothing but a teeny tiny tutu. The project aims to raise money and awareness for those with breast cancer, as well as bring "support, laughter, and understanding to a community that has endured far too much," according to its website.

"This all sucks, you know. And it's stupid that it's happening. There's no reason for us to suffer through it like this. I'm here to make people happy," Bob adds in this video.

​Besides the global aim of project, more than anything Bob just wanted to see his wife smile. During hard times when Linda was receiving treatment to combat the disease, she would always take her phone to her sessions, ready to show the photos of her husband to friends and nurses. The photos would always garner a laugh, making her treatment that bit easier.

"It just makes me laugh, to see my husband dancing around in a pink tutu. It helps be positive. The more I laugh, the better I feel," Linda says in the video.

But Linda wasn't the only one laughing at the photos. Soon people from all over the world began connecting with Bob and Linda: "This project is no longer just about Bob and I. When it went viral, we received so many emails and Facebook messages thanking us for sharing our story and bringing hope and laughter into their lives," Linda tells A Plus. "It was amazing that people want to talk about cancer and the impact it has had as well as [this] project, on their life. We were humbled."

Now people can buy their own pink tutu from their store - with all proceeds going towards helping others with cancer - ​​and post their own photos on social media using the hashtag #Dare2tutu, and then pass on the dare to friends. All funds raised with the hashtags goes to The Carey Foundation. The nonprofit organisation then donates directly to organisations that offer assistance with cancer-related costs such as transportation to treatment, home care, childcare and medical supplies. Since beginning the project on 1st October this year, the couple has already raised nearly $19,000.

It raises your spirits When a loved one supports what you are going through - even in crazy ways like this! #thetutuproject #dare2tutu #breastcancerawareness #daretobedifferent #inspiration #fortheladies

When it comes to summing up the project, Bob and Linda's website says it best: "yes, there is a man that uses his mad skills as a photographer to create beautiful images that help bring some levity to the realities of life with breast cancer."​ Never have we wanted to prance around in a pink tutu more!

Have you got a #Dare2Tutu photo? Let us know! @sofeminineUK