The Self Defence Techniques EVERY Woman Should Know 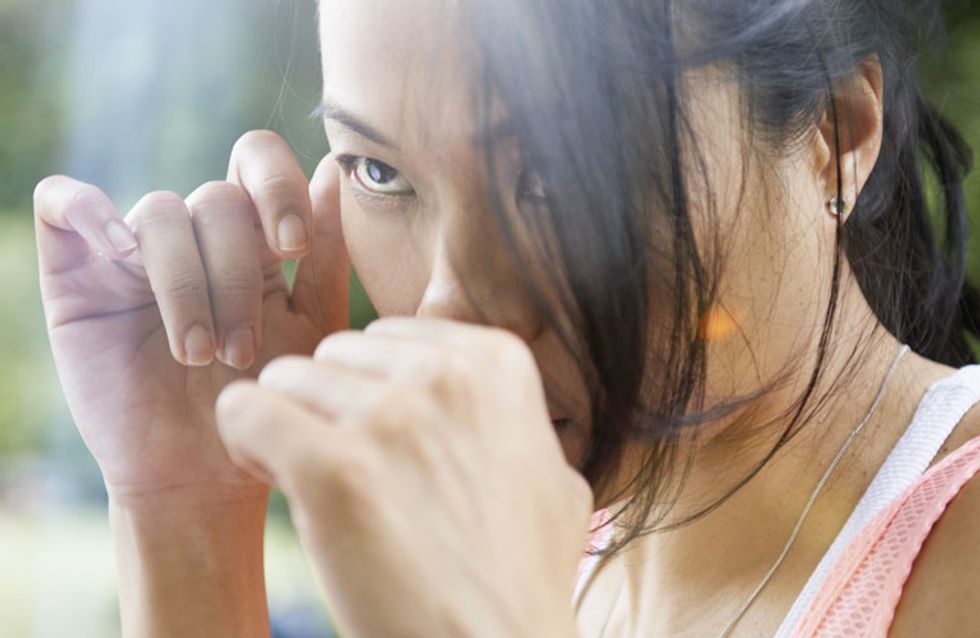 Would you be confident enough to fight back if someone attacked you? Or would you freeze up in utter panic? Getting mugged, harassed or assaulted aren't the kinda things we wanna be thinking about, but unfortunately violence here in the UK is a reality. So we got the low down on the best kick-ass moves every woman needs to know for basic self defence. Get ready to kick butt...

Nothing's more frightening than feeling like you're moments away from an attack but girl, don't let fear take you down!

​According to EU Agency for Fundamental Rights (FRA) nearly half of all UK women have been psychically attacked or sexually assaulted (a surprising number to say the least). So we'd say it's about time to start doing something about it. Not a clue where to start? Learn some basic moves for simple and effective self defence. Ladies, we'd like to introduce you to Krav Maga.

Krav Maga mixes elements of boxing, Muay Thai fighting, and the well-known martial arts, Judo and Jujitsu, to creative amazingly effective defense moves. However, it is never used to start a fight; it's only used to end a confrontation so you can get yourself to safety.

This Israeli self-defence system (YES really) uses basic, straight-to-the-point ​techniques that make for a brutal fight. Sounds kinda crazy, right? But would you risk your own life for the safety of the attacker? Nah, didn't think so.

Lucky for us, the combat technique (that by the way, is still used in combat today) has been tailored for women AND the street. Which is why we jumped at the chance to speak to Krav Maga instructor, Magdalena Nikitczuk who gave us all her tips and tricks on how to best defend ourselves, WHATEVER the situation.

BUT before demonstrating any moves we'll need to cover some basic ground rules first. Are you ready? Lets get started...

Distract the vision: Hit the eyes

When you feel like someone's about to attack you; making a dash towards you, shouting or holding a weapon, NEVER wait. Go straight for the attacker's eyes.

Magda says, "Human eyes are very sensitive. We all try to protect our eyes like treasure because it's a very important sense. We're doing it automatically without even thinking about it. No matter the size of your opponent, their eyes are just as sensitive for everyone and you don't need to be super strong to do this."

How? Use open palms, both if possible, with fingers directed towards the eyes. Using the same position of your palms (and at the same time) you can hit or strongly push away the nose or chin with the heel of your hand.

When? If you're in danger, go straight in with a direct hit. Sounds brutal, but it's what's gonna get you back to safety as quick as possible.

Magda says: "​You can use pre-emptive strike if you really feel that you're in the danger! According to law you CAN DO IT. If someone grabs your arm or jacket, don't resist, that's what they expect! Surprise them and hit the face as quick as you can!

"​When something dangerous comes close to the head and eyes people try to move away, close their eyes or even cover their face with their hands. That gives you another opportunity to hit another, painful point."

Which brings us to our next move...

Hit to the groin area

After a shot to the eyes, be prepared to target another sensitive area - the groin.

"You can hit groin area after a shot to the eyes (as the attacker covers himself) or as a first attack. It's a physical strike to a part of your body, which due to nerve endings can and WILL hurt. But unlike other areas, the groin lacks much of the protection that the rest of your body does," says Magda.

How? Use your intuition and do what feels right in the quickest possible way. The hit should be sharp, straight forward and as strong as possible.

"You can use your foot, instep, a shin-straight whipping motion upwards or a knee strike (with the kneecap or the surrounding area).", advises Magda. But this all depends on the distance from your attacker. You can also use your hands if you're not able to use your legs. Pull, punch or twist using your palms or a closed fist. Do whatever you need to do - don't hold back.

When? Use this move whenever you're in danger and you have access to this area. The important thing here is to be as swift and as sharp as possible. Magda says hitting the groin is "almost like someone is spraying a type of stomach ache gas that is slowly making its way towards your lungs." The sensation will leave your opponent on the floor, limping or even kneeling in pain. This is your chance to run for safety.

Distract the airways: Hit the nose

But sometimes you might only have a few seconds to get away! In this kinda situation your attacker will most likely be shocked and angry (as hell) so if you don' have enough time to get away you need to go in for your next hit. In this case, the nose.

Magda says the best thing to do is to keep "changing the level of attack- high (face) to low ( groin), low to high and so on and so forth until you're free and can run away."

How? Use a hammer strike motion by using the heel of your hand while your clinching your fist. Magda says,"The pain is extraordinary - no other body part hurts quite the way the nose does. In no time, it will become difficult and then impossible to breathe through the nose. In short, the nose is the facial pathway to debilitating your aggressor without putting his life in immediate danger."

When? Use this action in any dangerous situation. Don't be afraid to hurt your attacker. It's your safety or theirs.

The throat is another sensitive point of the body. If pushed hard enough the airways could close, making it difficult to breathe.

How? With an opened palm, use your hand and push your fingers inside the throat. Do this while pushing your attacker away. Magda says, "It MUST be done quickly and all at once to both, surprise him, and succeed."

​When? This move, also known as an 'educational block', can be used in a dangerous or even less aggressive situation such as a drunk person trying to hug you or get into your personal space. This action will quickly get them to move away and take you seriously.

The neck is another excellent target to go for. Similarly to your groin, your neck also contains a crazy amount of nerve endings, making it impossible for your attacker to fight back once struck. It's also not well protected like other parts of your body, which can be enough to overwhelm them.

How? You can use your hand in several ways here. One way is to use your hand in a chopping motion. "Use an open hand strike to the neck using the same technique as a tennis shot. The ONLY difference is, instead of the front of the hand moving towards the neck, you will be leading with the pinky side of your hand," says Magda.

​In other instances you could use your fist in a hammer motion or if closer to your attacker, go in with your elbow.

When? You can use this motion if you're grabbed from the side, for example, or if the attacker tries to grab your bag and pull you in. If someone attacks you from behind, go in with your elbow and do it as quick and as hard as you can. The more startled they are, the less likely they are to fight back.

Aim below: Attack the knees

A less sensitive part of the body this time - the knee.

Magda says, "A strong kick towards the legs and knees might stop the attacker from running after you. But large forces are required to fracture the knee joint."

How? Turn your head quickly to get a good view of where to strike and act immediately. "Use your foot with a horizontal stomping kick directly to the knee," says Magda. Never resist action.

When? Act as soon as you sense a threat or the attack begins. You could use this move when the attacker is grabbing you from behind and you want to move away to stop their action. Magda recommends not to face him, act and go as quickly as you can!

If you're interested in perfecting these techniques then join a class with Magda herself at The Institute of Krav Maga. Trust us, this could seriously save your life.

What other techniques do you know of? Tweet us @sofeminineUK!

Weight Lifting For Women: 14 Reasons To Get Weight Training