Twerk alert: The most sexist music videos of 2013

by Stephanie Ashley Published on 13 December 2013 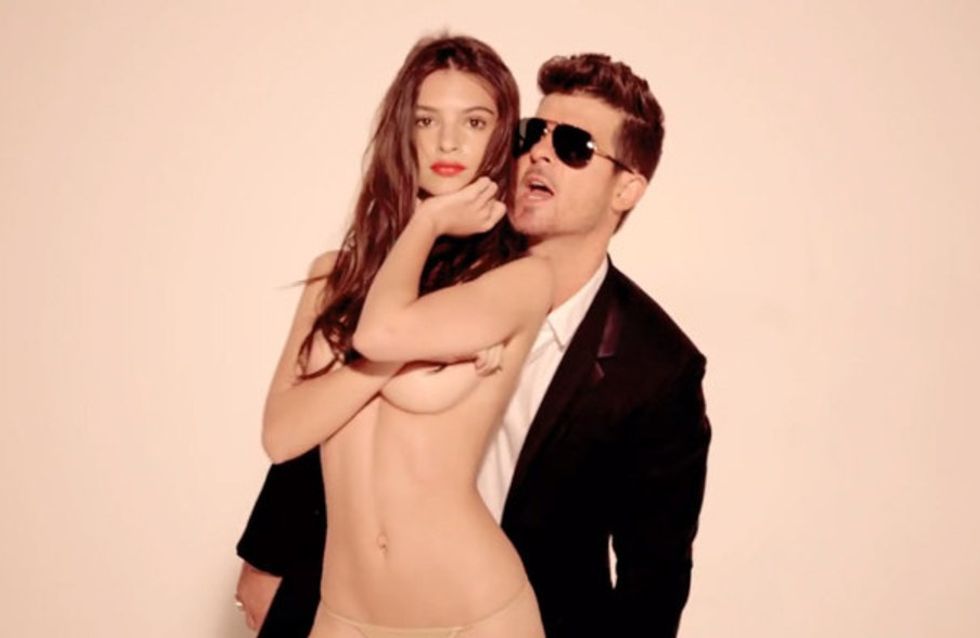 With the recent release of the 2014 Grammy nominees, it’s hard not to think back on what an amazing year it has been for music. But what kind of year have women in particular had in the music industry? Going by this round-up of music videos and performances, the fight for feminism has taken a bit of a backslide this year. Introducing the most sexist videos of 2013...

If there's one thing we've learnt this past year, it's that women have bums, and that if they shake 'em good, it's twerking - which everyone seems obsessed with.

With Miley’s infamous performance at the MTV Video Music Awards and Robin Thicke’s misogynist video for hit song Blurred Lines, women have not been getting the best representation in the music industry this year.

Even with strong female artists like Beyonce and Lorde, women are still constantly, perhaps unintentionally, viewed as sexual objects in music videos and performances.

The argument can certainly be made that these women are using their sexuality as a source of power and sexual liberation, with no intention of demeaning women, but, think about it, is that really what all the men in the world see when a nearly naked woman shakes her stuff on stage?

We admit, there's something mesmerising about the twerk, it's kinda sexy, and it's kinda creepy. Can we move on yet?

Before we do, here’s the sofeminine round-up of some of the more discouraging, twerk-filled, moments for women in music in 2013. Bring on the New Year. We're ready for it.

While Robin Thicke, Pharrell and T.I. are all certainly sexy, they have unfortunately fallen prey to arrogance with their catchy, hit song Blurred Lines, now up for the Grammy for Record of the Year.

Let’s be honest, this takes things a bit too close to referencing non-consent. For a blatant example, take a look at the parody video of Robin’s song performed by women from the Auckland Law Revue (#sexcrime). Trust us, it's amazing.

Further public rage came over the music video for the song, where nearly naked women parade around the three fully clothed men. Empowered? We don't think so.

Thicke, Pharrell and T.I., we're ashamed of you.

Miley has taken quite the turn over the past year. From her infamous twerking performance with Robin Thicke at the MTV Video Music Awards to her break-up with Hunger Games star Liam Hemsworth, she has constantly been in the spotlight.

And it seems she has taken full advantage of it. At many public appearances, the star has worn next to nothing, almost baring her assets to the world. And that's nothing compared to her music video for her song "Wrecking Ball" where she wears, literally, nothing.

In an interview with BBC1 Radio, Miley said, “I feel like I’m one of the biggest feminists in the world because I tell women to not be scared of anything.”

While that's admirable, and we admit it takes a great deal of bravery to dress in some of Miley’s get-ups, isn’t there a better way to boost women’s confidence than twerking everywhere and licking a sledgehammer? We were never afraid to do that before, we just never wanted to. Still don't.

We love Mr. Worldwide, for his rise to fame, his catchy tunes, and his sense of style, but even he has fallen for the twerking trend.

At this year’s American Music Awards, there was an awkward moment on stage when Pitbull called a group of women up for a lesson on twerking.

While we’re sure many audience members enjoyed the display, was that really necessary?

Rihanna - Pour It Up

RiRi is a crowd favourite, for her killer style and kick-ass attitude. But what of her sometimes overly sexualised music videos?

For example, her video for Pour It Up has gotten some criticism for her minimal, if glamorous, clothing choices and her decision to twerk provocatively on her throne prop.

Other videos by the starlet, like her recent release for song What Now, are sensual while remaining chic, edgy, and still completely classy.

While Rihanna’s got an awesome body and definitely knows how to flaunt it, does she sometimes take it too far? We've been all kinds of intimate with Rihanna this year. Too intimate.

Singer Lily Allen is known for her scathing critiques of society’s expectations, particularly for female performers, and her new song Hard Out Here is no exception.

In the song, Lily takes aim at the stereotypes that women should be under-dressed and sexy in music videos and perfectly domesticated in the home.

It is quite obvious from her song that the performance was meant with plenty of irony, but her video has still received a great deal of criticism for possibly being racist and insulting towards African American women. Missing the point somewhat?

Female sexuality in the media is a tricky subject, today more than ever. Many female performers, like Beyonce, use their sexuality as their power, and almost no one accuses them of taking their performances too far.

However, for performers like Miley Cyrus, Rihanna, or any male performer with scantily clad female back-up dancers, they more often than not step into the firing line where equality and feminism are concerned.

How far is too far with female sexuality in music performances? Tweet us @sofeminineUK.