by the editorial team Published on 11 February 2014 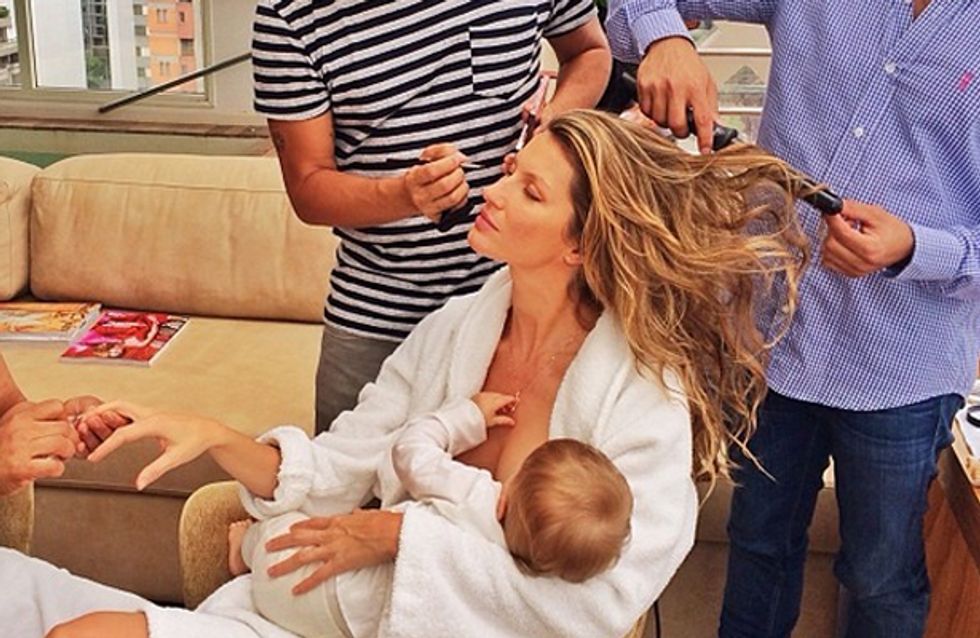 When you see Victoria’s Secret, what do you think of? Beautiful lingerie? And breasts. Every lingerie ad features the beauty of the female figure, hell, the brand positively promotes sexiness, but it seems that breasts as anything other than sexy (say, perhaps functional) are a big VS no-no. When a new mum asked to breastfeed her hungry baby in a Victoria’s Secret dressing room, we were shocked to hear they told her to use a nearby alleyway instead.

Why has breastfeeding become so stigmatized? It seems like whenever a new mum wishes to feed her child in public, people think she has turned into an exhibitionist. Mothers become self-conscious that those around them believe they simply want to flash the world, instead of comfort and feed their child.

Victoria’s Secret is perhaps the one company you’d think would be on board with breastfeeding in public. All of their ads feature scantily clad women and a significant amount of cleavage. So, why on earth would they turn away a mother wanting to breastfeed her newborn?

That is the question Ashley Clawson must have been asking herself when she visited a Texas Victoria’s Secret store back in January. As she was checking out, her baby began to fuss. It was January, so of course it was cold outside, and her car was not parked nearby.

The store was not too busy, so when Ashley asked a Victoria’s Secret employee if she could breastfeed her child in the privacy of a dressing room, all should have been well, right?

Ashley told US magazine, Culture Map Austin, “The woman who checked me out began to nod her head yes, but before she had a chance to respond, the employee next to her immediately responded by telling me I was not allowed to nurse my son in her store. Instead, I could walk outside to a nearby alley.”

So, let’s get this straight: the employee asked that a customer take her newborn child down an alley to breastfeed in the freezing cold winter weather? (This is where your jaw lands on the floor).

“I was instantly confused and shocked,” she says, “so to clarify, I asked her, ‘You want me to take my son outside, down an alley, and nurse him?’ She responded by saying yes. It was cold and windy—there was no way I was going to walk down an alley in the middle of the elements to feed my son.”

Ashley’s baby had become quite upset and was crying, so Ashley quickly rushed out of the store and to the nearest bathroom, where she had to nurse her child in a toilet stall.

Ashley says she felt “Disbelief, hopelessness, humiliation, anger and confusion” over the whole ordeal. “I had never thought of breastfeeding as such a shameful thing, especially in a store where breasts are visible in every corner.”

​Despite Victoria’s Secret saying in a statement that they have a long-standing policy of allowing mothers to breastfeed in their stores, Ashley was still turned away after her request.

Why has breastfeeding, in a world objectifying the female body to such a degree, become viewed as such a disgusting thing? “Breasts have been so over-sexualized in our society that it’s completely acceptable to have huge billboards of half-naked women wearing Victoria’s Secret push-up bras and thongs, yet I need to go hide down an alley in order to breastfeed my son,” Ashley says. “Oh, the irony!”

Famed Victoria’s Secret model Gisele Bundchen is herself a huge supporter of breastfeeding, even posting a picture on Instagram in December of her nursing her daughter while being pampered by a beauty team. She even said back in 2010, after her son was born, that she believes breastfeeding should be required by law!

So why can’t society get on board with breasts being used to nurse an infant, not just to look sexy in a push-up bra? Breastfeeding in public is obviously an uncomfortable topic for some people, and Australian musical duo Sparrow-Folk have decided to write a whole song about it.

The video for their song “Ruin Your Day” features mothers breastfeeding their children in a café, while the duo sings about how new mothers are simply “exhibitionists.”

Many people wish breastfeeding in public could become less stigmatized, but there are also mothers out there who believe breastfeeding is a very personal experience, not really meant to be shared with the world.

In response to Gisele Bundchen’s Instagram post, Denise Albert, co-creator of TheMoms.com told ABC News, “I think breastfeeding is a very personal thing. And for her to put this on Instagram while she’s getting her hair and make-up done is a little outrageous, and I think obnoxious.”

Whatever a woman’s personal feelings about public versus private breastfeeding, she should be allowed to make the decision to nurse her child without feeling ashamed or publicly humiliated. When breasts are objectified everywhere in the media, can you still believe that breastfeeding is such a huge issue? Ridiculous in every way.

What is your opinion on public breastfeeding? Tweet us @sofeminineUK