Home / Women in Focus / Personal Life / You're Annoying As Hell But I Still Love You: 30 Things ONLY Sisters Will Understand

You're Annoying As Hell But I Still Love You: 30 Things ONLY Sisters Will Understand 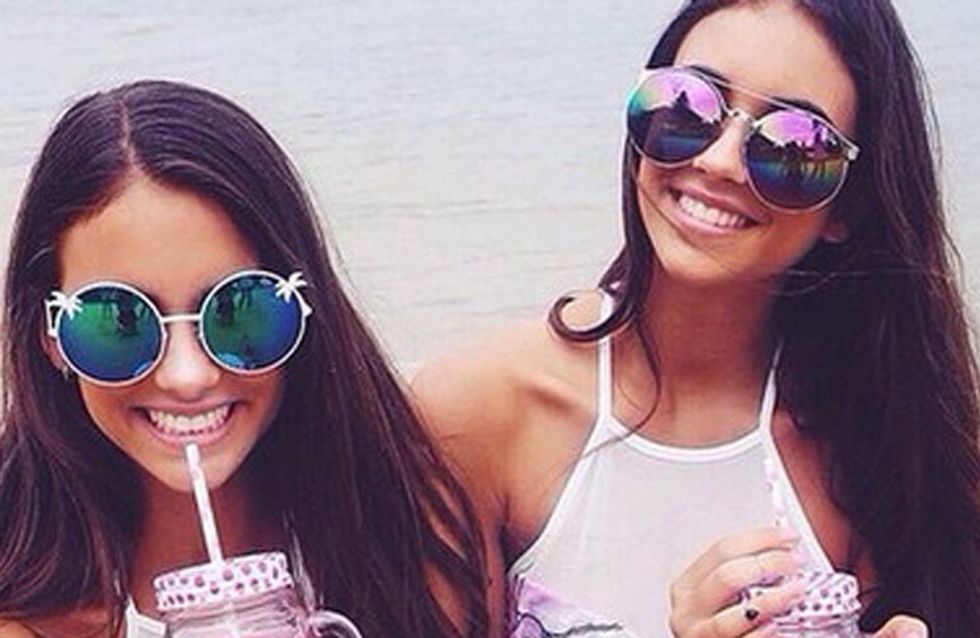 There's nothing quite like having a sister. After all, it's like having your very own ready made BFF. The double wardrobe, the (brutally honest) insults and the fights that only last, what, like five minutes? A sisterly bond is unique but it's pretty hard to explain. Here's us trying anyway! Check out the thirty things only sisters will understand... let's just say - having a sister is awesome.

1. Your fights are temporary

You fight about the most random ridiculous things but five minutes later it’s like it never happened (bearing in mind you just called her a b*tch). Forgiven and forgotten.

2. But some people just don’t get it

They look at you like you’re both psycho or at least slightly bi-polar. How can you stay mad at your BFF?

3. And if you happen to be in public

Ever find yourself with your sister and decide one of you will pay and the other will 'pay back'? It’s just easier, right?

Definitely an argument waiting to happen though. Whether it’s fifty pence or fifty quid you want your money back NOW. We’d never ask a friend but your sister - pfft she's ain't getting away with it.

5. You have double the wardrobe

The great thing about having a sis is that you can borrow each other’s clothes at ANY TIME. And if she says no it's not stealing if it's family...

6. You have some sort of telepathic connection

…without even saying a word to each other. You know that thing when you look at each other and just start cracking up? That one.

There’s nothing more chilled than being slumped on the couch sans makeup, wearing sweats and hugging a bowl of popcorn with your sis. No need to look even remotely attractive here. WIN.

Sisters love talking about the next OMG beauty product. Why watch all those Youtube tutorials when your sis is practically a living beautypedia?

9. You’ve got LOADS of inside jokes

In fact your jokes are a running comedy. You’re laughing so hard your stomach hurts but no one will ever understand. Standard.

…when you’re out for dinner together. She's the one girl you can scoff what you like with sans judgement. Anything with cheese or chips puts a smile on your faces. And dessert? It going down.

11. But you’ll always ask to share each others meals

So you can get the best of both, obviously. Plus, if you’re not happy with your dish, you still have her half to be thankful for. She’ll probably be pissed off, but who really gives a damn, right? She’s your sister.

12. You’ve got codes for everything

Or just need to say a few words for her to clue in. You: Do I have any lines (i.e. Make-up lines) Her: Nah, you’re good. Hey, no one needs to know…

13. You have fun no matter what

You’d rather hang out with her than your best friend, because having a sis is a BFF on ANOTHER level. She’ll be around forever and lets face it she’s actually less annoying than your friends…

14. Your parents confuse your names

You don’t even need an identical twin sister. Parents WILL accidentally call you your sister’s name. Er, that’s NOT my name?

You can ask her anything and there’s no guilt involved. Nothing's too rude or forward. Same goes with bitching - you know you can trust her not to tell. It's a pinky promise.

16. But you never give too many details…

…when it comes to SEX. She doesn't want to know details about how good it felt or what your favourite position was. Please, save it for your mates.

17. She’s always got your back

No matter what, if someone's got beef, you know she’ll always be there to back you up.

There’s no such thing as a dying friendship. Whether it’s two weeks or two months you know you can pick up right where you left off. That's real love right there...

19. She’s your only honest critic

Boyfriends? Friends? Nah. If you really want to know how your dress looks just ask your sister. She’s the only one that’ll be straight up with you. Her opinion counts.

20. You can call your sister for NO reason

You might be bored, walking home by yourself or just fancy a random catch up. Just as quickly as you called her, you can cut the call. She won’t be offended. Trust.

Whether it was choreographing a dance routine to Britney Spears or pretending like you were The Little Mermaid you both wanted to feel like either a pop star or a princess.

If no one else likes your status you know your sister’s got this. The girl is gonna LIKE.

23. She keeps you grounded

Your sister is the only one that will bring you back down to earth. If you’re being annoying, acting like an idiot or doing something wrong she’ll be the first one to tell you. They make you a better person.

If anyone is worth asking man advice to it’ll be your sis. She’ll tell you to drop his ass in a second. No problem.

25. You had outrageous fights when you were younger

Hair pulling, head banging and the classic bitch slap. You've got scars too. But hey, you know how it is…

You’re only half as nice to your sister yet she’s the one that helps you out the most. She knows when we’re thankful anyways - please and thank you’s aren’t always necessary.

Whether it’s boyfriend issues, you heard a creepy noise or you just have a random question you don’t need to take the time of the day into consideration. She might be annoyed, but she’ll always be willing to talk no matter. Who needs a boyf, right?

28. You’re grateful for her

There’s nothing she can do to stop you loving her. Sisters have a special bond and secretly we really LOVE it. It's one of the only relationships that really do last forever. #grateful

29. The older ones always have an advantage

When you grow up the older sister is always cooler. You want to be like them and copy everything they do. And for some reason they’re always the ‘clever’ one too. What’s up with that?

30. She genuinely worries about your safety

We always act casual about it, but we’re really the ones staying up untill she gets home or checking her Whatsapp to see the last time she used it. Sisters are the first to jump to conclusions too. OMG what if she was abducted? Call 999!

What's your fave thing about having a sister? Tweet us @sofeminineUK!