by the editorial team Published on 1 April 2011 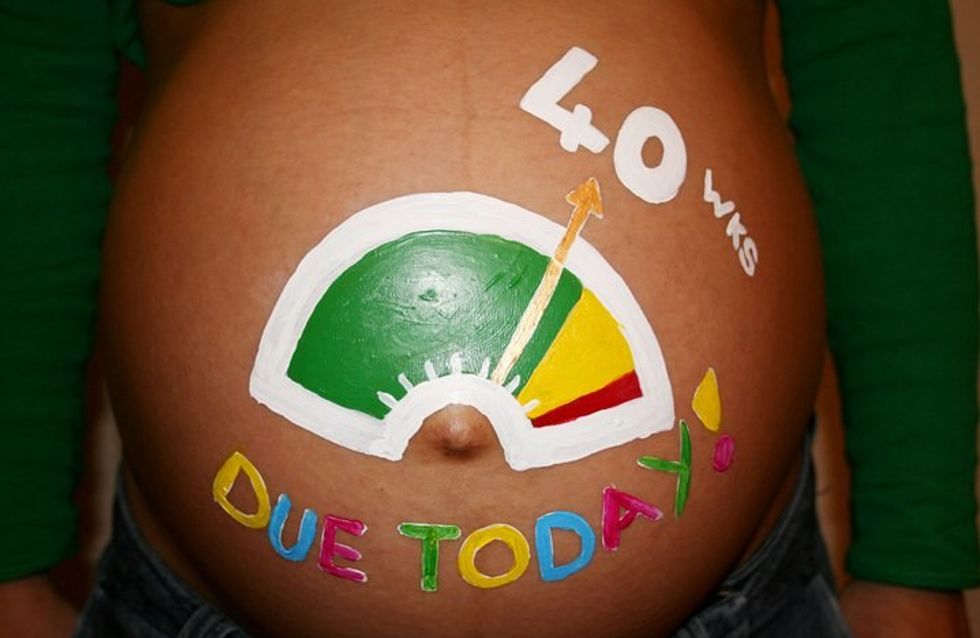 Sproglet, my new baby, was due on the 15th Jan. The day came, I was so excited, ready for it, hospital bag packed, my maternity notes in hand.

I even got my friend Cece to come around in the morning to paint my belly with a ’40 Weeks, DUE TODAY!’ as a celebration of the final week of pregnancy. Little did I know I'd be 41 weeks pregnant before my new baby arrived!

But lunch time came, I didn’t feel any different, then dinner time came and went, still nothing.

I went to bed thinking I’ll give it another couple of days, I was a week early when I was born and Ryan (my fiancé and Sporglet's father) was early as well, so this new baby is probably due very soon... surely?

Oh how wrong I was!!

The whole week passed, and nothing came! I'm 41 week's pregnant and no new baby for the Li/Scott mini-family! It had to be the longest week of my life!

It’s quite frustrating waiting because it’s not like you can ring up someone and check when the delivery will come. Or vent your frustrations on some dopey but ultimately blameless telephone help desk operator.

The anticipation was killing me and I thought I was a patient person. Physically I felt quite normal, no cramps, the baby had been quite active, lots of squirming and kicking, I kept saying to him or her (we wanted a surprise):

’You know if you want to come out, I’m ready for you! Just keep squirming down.’ As if my mental instructions might help little sproglet find the exit.

My estimated due date - according to western medicine
The estimation of due dates are usually slightly out, there are no scientific ways of doing it, just theories. Only 10% of the first birth deliver on time or early apparently.

I was told 15th Jan but who really knows?

My estimated due date - according to my mum's Chinese methods
According to my mum’s Chinese way of calculating, my due date should be the 18th not the 15th. The way she does it is use the month of your last period minus three, in my case April, which is 4 - 3 =1, gives the month of January, then the first date of your last period plus seven, which for me was the 11th +7 is the18th.

Well, whether that was a closer calculation or not, it was still wrong.

Ryan and I carried on with life each day as normal as possible, we tried to keep ourselves occupied so we won’t get too frustrated or bored.

At night time, we went to friends’ houses, went out for dinner, went to the cinema - only because we managed to watch all the films on SKY movies!

We tried all the ‘known methods’ to hurry up the process, eating hot curry, eating pineapples (but apparently you have to eat about 7 of them for anything to happen), walking, dancing (to drum n’ bass - my choice), sex, raspberry leaf tea.

But nothing worked! Probably just all myths, the new baby will come when he/she is ready. Still, it was fun trying.

The Midwife's appointment for late babies

On Thursday night, I had a midwife’s appointment, it was just a normal check up. She felt the position of the baby, which had the head down in the right way, the heartbeat was fine, my blood pressure was normal as well.

I told her I was worried about the new baby being late, but the midwife reassured me that he/she is just not ready yet, and it’s common for the first pregnancy to be late.

She also said, however, they will not let a pregnancy go beyond 42 weeks, because there are not enough medical research to know if the placenta carries on providing for the baby after 42 weeks, so they will induce the birth then.

She said she’ll give me another couple days to see if I’ll go into labour naturally, if not I’ll go in for a Membrane Sweep on Monday which is an internal examination, the midwife will simply "sweep" a finger around my cervix (neck of the womb).

The aim is to separate the membranes around the baby from the cervix, this releases hormones called prostaglandins, which may kick-start the labour.

If that doesn’t work, I’ll have to go in mid week (41 weeks and 3 days) for a scan to check there is enough fluid surrounding the baby, and they will try another Membrane Sweep and wait until the end of the week.

And if that still doesn’t work, I’ll have to go into hospital and the doctors will have to physically induce labour by breaking the water.

I could still have a natural birth in this way, but will have to be monitored closely by the doctors.

So it looks like either way, we’ll have a baby next week!

Did you have a Membrance Sweep or where you really overdue? Have your say in our baby and toddler forums