How To Predict Your Baby's Gender According To Old Wives' Tales 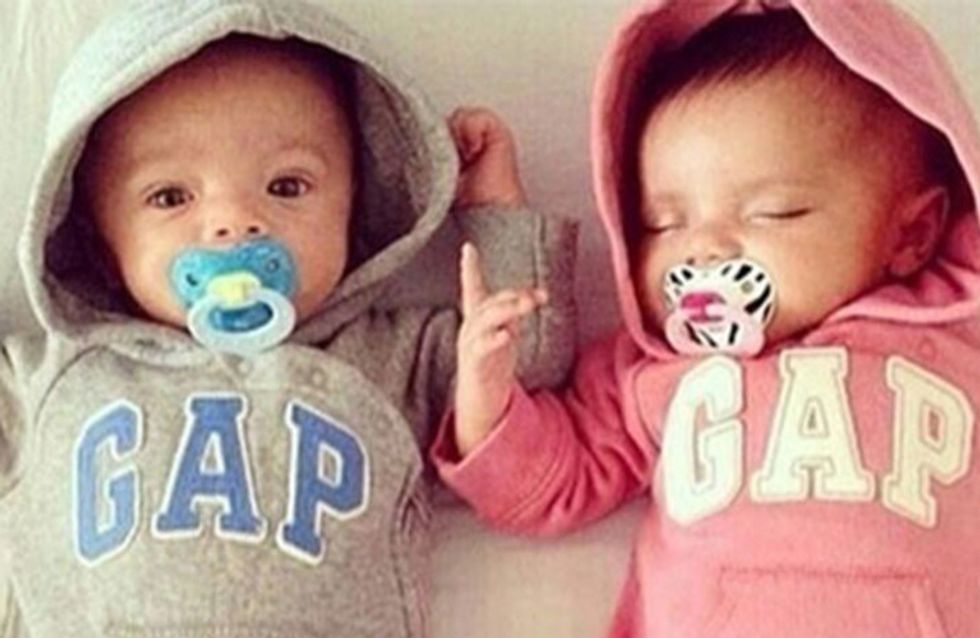 Before sonograms we resorted to strange and slightly absurd methods to find out the gender of a baby. Mixing pee with baking soda, placing necklaces over your heart, and analysing the shape of a pregnant woman's face are some popular old wives' tales for gender prediction. You might be skeptical of their accuracy but try some of these out for fun. There's a 50/50 chance it'll be correct after all!

Surprising yourself, family, and friends with the gender of your baby is one of the best parts of a baby shower! Some couples slice into a colour-coded cake or open a box of balloons (pink for girl, blue for boy). However you choose to reveal the baby's sex is up to you, but knowing if your bump is a girl or a boy can make preparing for your child a little easier.

We didn't always have nifty technology to discover a baby's sex. Midwives and expectant mothers put their faith in rather bizarre gender prediction tests. As crazy as they might seem, we know you totally know want to try them!

A baby's heartbeat is a comforting sound for a pregnant woman but it could also impart some valuable information as well. According to midwifery lore, if a baby's heart beats above 140 times per minute, it's a girl, and if the heart beats less than 140 it's a boy!

The validity of this test has been proven false by the medical community, those party poopers, but it's such an easy, harmless test that it'll be hard to resist trying it out at your next OB/GYN visit.

We doubt you're reaching for some red cabbage while pregnant (unless it's cookie flavored) but pick up a head of lettuce on your weekly grocery run. Boil the cabbage, save the water, and mix a few ounces of your pee in it. If the water turns purple, it's a boy. If the water turns pink, it's a girl!

It's a popular gender test that been around since your great-grandma started making babies! Tie a string around an important ring and then lay back. Have a friend or your partner dangle the ring right above your belly or wrist. If the ring swings in a back and forth like a pendulum, it's a boy. If it swings in a noticeable circular motion, it's a girl.

The Mayans gave a lot to modern civilization. They invented an advanced writing system, introduced the world to the concept of Zero, and were gifted astronomists.

That cultural curiosity also lent itself to gender prediction. Apparently, if both the age a woman conceived and the year the baby was conceived are either even or odd, those kicks are coming from a girl. If one number is even and the other is odd, it's a boy!

9. The Sweet vs Salty Test

Before going in to find out the sex of your baby via sonogram, think about what you've been craving so far in your pregnancy. If you're bugging your husband to buy you potato chips, fries, and other salty foods, then you're carrying a boy. If you're all about chocolate, pastries, and other sugary sweets - it's a girl.

Yup, another test involving pee. For this one you add 2 or 3 tablespoons of baking soda into a disposable cup. Then add a few ounces of your urine to the baking soda. If the mixture fizzes up, it's a boy. If there is a small to no reaction, it's a girl!

Similar to the Mayans, the Chinese created an ancient gender prediction chart that uses the age you conceived with the month you conceived to find out if you're having a girl or boy. Try it out here. Apparently it's pretty accurate!

Pregnancy isn't very kind to a woman's skin, but some have it worse than others. If you start to sprout lots of acne then, according to the old wives' tale, the little girl inside of you is stealing your beauty. If your skin remains relatively smooth, then you're carrying a son.

If your nipples turn really dark during your pregnancy, then you're having a boy. If they don't change colour, it's a girl!

A woman's face generally gets fuller during pregnancy, but if you notice that your face is pretty round then you're probably going to have a daughter. If your face is long and narrow, then it's a boy. Of course, the old wives' foe - the medical community - has stepped up to say this test is super inaccurate since most pregnant women get rounder faces because of the extra fat and water they're storing.

Hair is going to grow in the most random places when you're pregnant. Apparently, if your hair grows quite fast then you're pregnant with a boy because of the extra testosterone, but, of course, there's no scientific basis for this test.

OK, so if you have rageful mood swings and abrupt crying jags then the old wives predict that you're having a girl because of the extra estrogen and hormones racing through you!

17. The "Don't Believe Your Dreams" Test

If you're wishing, hoping, and especially dreaming about having a baby girl...sorry - the stork is going to drop of a bundle of male joy! If you're dreaming about your future daughter, then you'll be blessed with a boy.

Obviously it's a given for pregnant women to gain over 10 pounds in baby weight. With all that extra food around the house, your husband is sure to get his hands on it over the next 9 months! His waistline could indicate the sex of the baby. If the father-to-be puts on some noticeable pounds during the pregnancy, you'll soon welcome a girl into the world! If he doesn't gain any weight, get yourself prepared for a boy!

This test applies to pregnant women who already have children. If your youngest child's first word was "Mum" then you're having a girl. If their first word was "Dad" - it's a boy!!

If you have cold feet during your pregnancy then it is said that you will be having a boy. If your feet don't feel particularly colder or warmer than usual then you're supposed to be having a girl.

What gender test are you going to try? Tweet us @sofeminineUK

Advice For New Parents: Things Every Parent Needs To Know About Newborns

89 shares
From hair ideas to outifts, look no further for your daily inspiration