by Lareese Craig Published on 17 August 2015 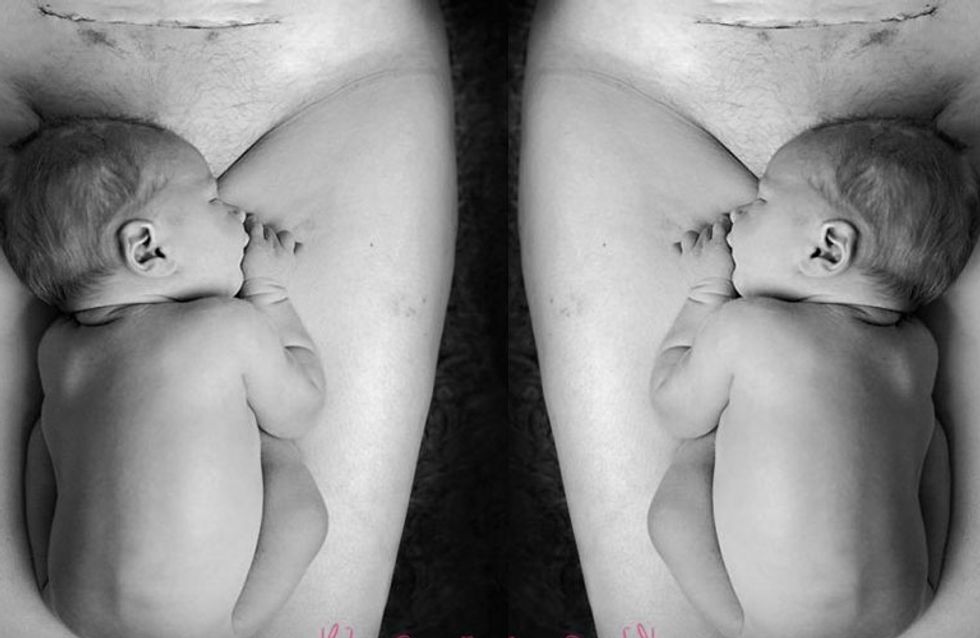 For some women, having an emergency caesarean is a terrifying thought and far from the controlled, natural birth they had dreamed of. But rather than viewing C-section scars as a sign of fear and struggle, this photographer is spreading an inspirational message about the power of a mother's body. Mums to be - this one's for you!

Photographer Helen Aller often takes photos of newborns and their mums, but she never expected her latest shot cause such a reaction across social media.

After photographing a pregnant mother in July she learned that the expectant mum was terrified of the thought of having a caesarean. After the woman had given birth she called Aller to tell her that her fear had been realised.

Aller told The Huffington Post: "She had to have an emergency c-section. She asked me to go over and shoot this particular image to show that her biggest fear ended up saving both their lives."

This extraordinary picture, shared over 37,000 times, captures the beauty of child birth in the most inspiring way. A three-day old newborn lays directly underneath his mother's scar from her emergency caesarean in a life-affirming reminder that this struggle happened to save both their lives.

"His head is supported by her pubic bone. We had just finished up shots of the baby asleep on a bean bag so the mum got in position and I placed baby straight onto her asleep and took the shot."

The beautiful black and white shot encourages women to realise the power of their own body. They might be experiencing anxiety about having a C section, or after having one, feel as though their bodies have let them down because they didn't deliver naturally, when the reality is quite the opposite.

"I have received so many stories from c-section mums saying how it has changed the way they look at their scars.
I can’t believe the amount of women that are ashamed of their scars and are made to feel like they haven’t done the job properly because they didn’t give birth naturally. In fact I am stunned.

"I feel proud that an image I created has allowed so many people to open up about their experiences and change the way they feel about something they should only feel pride for. Giving life shouldn’t be a competition of how you did it. I also think it’s turned into more than just the image. I think it’s more about people coming together sharing their feelings over something that often gets overlooked and put to one side."

And it's not just mums that are feeling inspired by Aller's work, proud dad's are joining in the conversation too:

One father expressed his admiration by saying, "I have yet to meet or hear from a guy that says, 'oh gross, c-section scars are disgusting or horrible'. We also see the beauty in giving birth to a child no matter how it happens."

Another dad added: "Women are beautiful and have the gift of life. I have nothing but respect for any and every mum because I truly believe that if that gift had been given to man we would be extinct. Helen Aller you have posted a beautiful picture that all woman and all fathers should be proud of. Good work!"

Whether natural delivery or emergency C section, your body has created a life and that is something to celebrate with pride, scars or no scars.

Being a woman is amazing stuff! Are you feeling the baby love? Tweet us @sofeminineUK

Women Are Celebrating Their Imperfections With #ThighReading