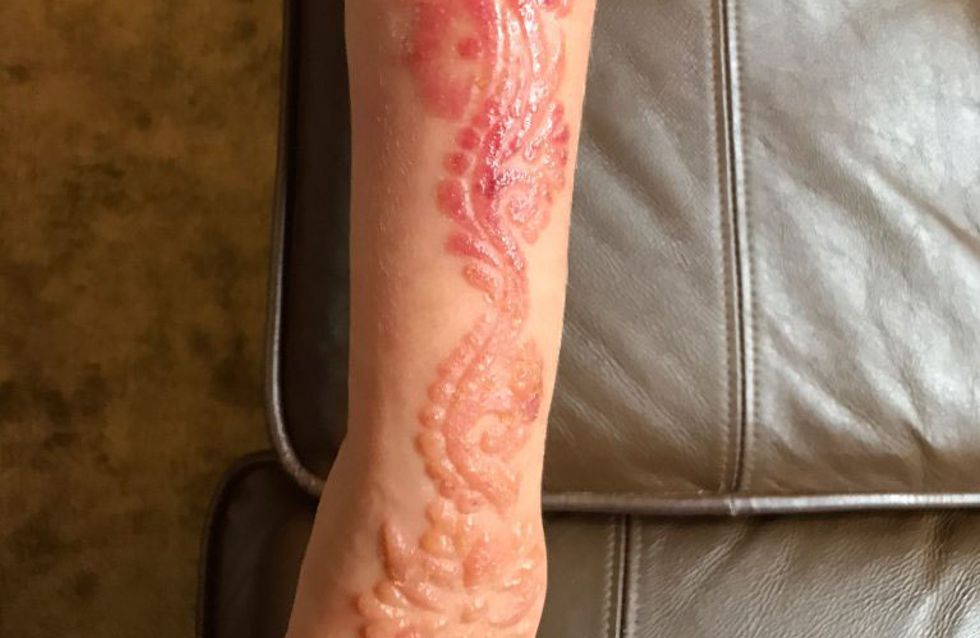 Getting a henna tattoo is basically a rite of passage for any young girl on holiday, along with getting a colourful hair braid or going on one of those trampoline bungees for kids. But more and more families are finding out the hard way that many of these hennas are being mixed with chemicals that are causing severe burns.

7-year-old Madison Gulliver was on holiday in Hurghada, Egypt, with her family when she decided to get a henna tattoo. All was fine as she had the henna applied - it was only once her and her family were back in the UK that they noticed a problem.

"We noticed there was a small patch on the top of the tattoo that was raised but we couldn't see any redness," Madison's dad Martin told ITV.com. "The next morning the whole tattoo was starting to get itchy, so we washed it off which revealed a rash in the outline of the tattoo."

Madison complained that the design on her arm was beginning to get itchy, and soon the pattern had developed into a whole bunch of painful blisters. And if that wasn't painful enough, she was taken to hospital and doctors had to cut the blisters off in a specialist burns unit. Madison now has a prominent scar that will remain a horrible reminder of a happy holiday treat gone horribly wrong.

Madison's family have shared their story to make other parents aware of the chemicals that are in henna. Martin said it was only as the henna started to blister that they checked online about black henna tattoos, "and that's when we realised all the worrying things."

The chemical para-phenylenediamine, also known as PPD, is often found in products such as henna and hair dye, but PPD is an allergenic chemical and often causes hypersensitivity reactions in children, meaning its presence in henna is now classed as a public health issue.

In Madison's case, the henna had a high PH level, which indicates that her reaction to the liquid was a chemical burn, and it is possible that Madison could be scarred for life.

"We were entirely unaware of the dangers," Martin said. "I think they should warn of this in the brochures."

Have you had a reaction to henna? Let us know: @sofeminineUK