by Lareese Craig Published on 25 August 2015 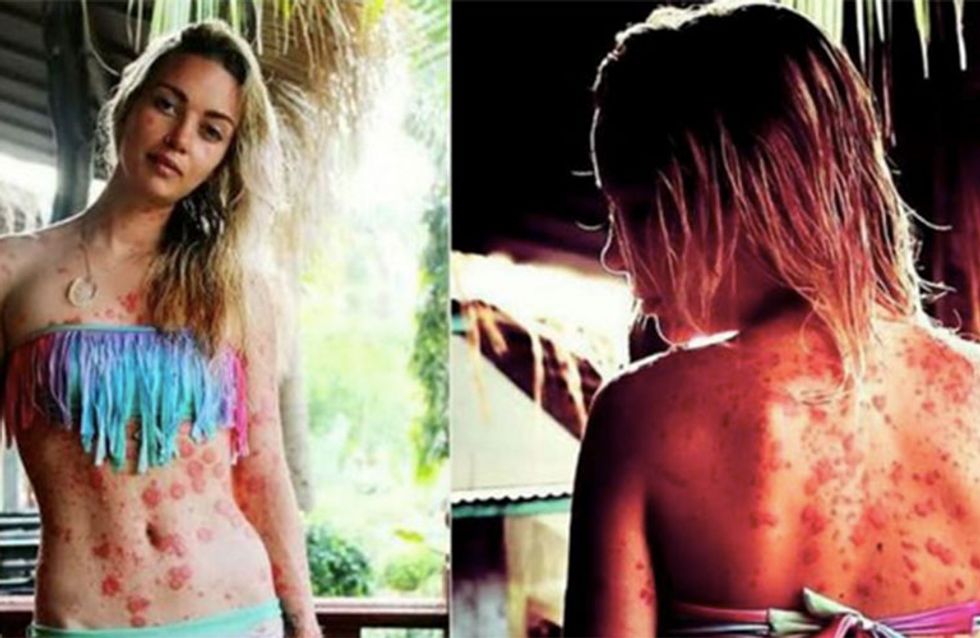 Admit it, we've all hated our skin at some point in our lives: the odd hormonal breakout, annoying blackheads, bumpy zits that amount to nothing, but what if you suffered with painful psoriasis every day of your life? Would you cope with the stares and constant name-calling? Giorgia Lanuzza did and now she's inspiring other people to do the same.

Giorgia Lanuzza has suffered from painful psoriasis since she was 13 years old but after years of feeling super self-conscious about her condition, she's finally ready to stop hiding away.

The 24-year-old from Basingstoke told Metro that she used to cover up her psoriasis because she felt 'like a freak'. People would stare at her in the streets and 'look at her as if they might catch something', despite the condition being non-contagious.

She believes her psoriasis could have been triggered by the death of her father when she was just 13, as trauma and anxiety can often cause flare ups.

"When I lost my dad I felt like the world had ended. We were so close when I was growing up, and I couldn’t bear losing him," she recalls.

The more anxious she was about it the worse the flare ups became and after flying home early from a 6 month planned trip to Thailand she decided enough was enough.

She said, "I knew I had to find a way to make the condition work for me, otherwise it would ruin my life. So I put together a portfolio of photos of myself in bikinis and skimpy clothing to show I wasn’t going to hide my psoriasis any more," she explains.

"The wounds are red and scab-covered in the photos, but I won’t hide them away or edit them. I’m proud of them now — they remind me that I’m strong.'

Giorgia now plans to further tackle the stigma of psoriasis by setting up a Facebook page where people can share photos and learn to feel proud of their differences too.

"We might have conditions that make us look different from other women, but we are still beautiful," she says.

Has Giorgia's story inspired to embrace the skin your in? Tweet us @sofeminineUK

Photographer Is Celebrating Different Beauty Ideals In The Most Beautiful Way