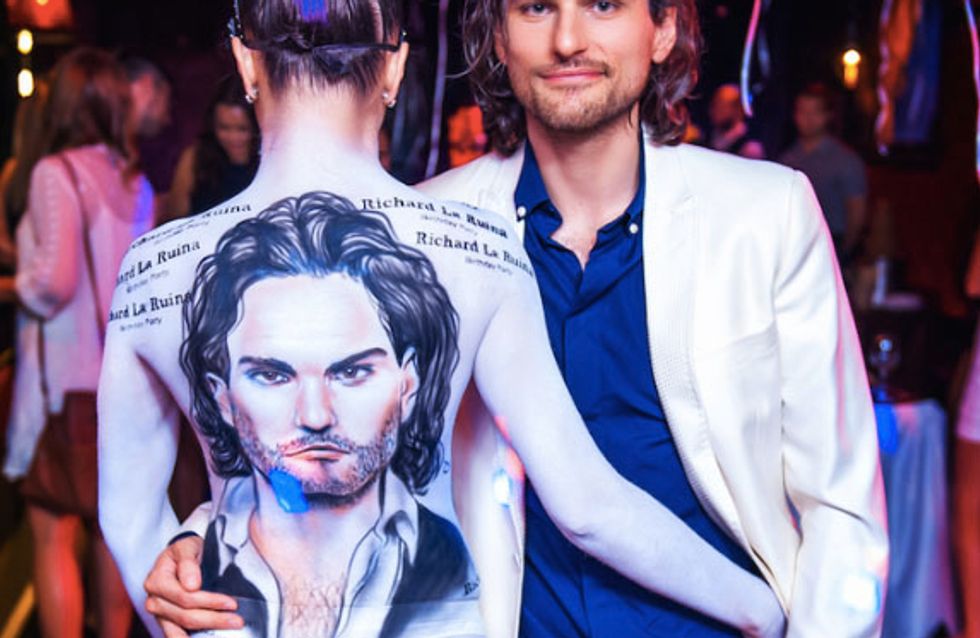 Richard La Ruina is a dating expert, apparently, and as such he has advised men that they should avoid dating British women because we're, like, so gross. Instead, he advises that they should date "beautiful" Russian and Eastern European women. Yeah, that guy over there, with his own face painted on a semi-naked woman. He's giving out dating advice. I know.

La Ruina, 37, has published two best-selling books on seducing women and was named "one of the country's top pick-up artists". Yes Richard, who looks like he was always sat on the bench during the slow dance at a school disco, is apparently qualified in dishing out really awful and sexist dating advice to equally awful men who need a "dating expert" to talk to women.

Richard moved to Moscow in 2011 after becoming tired of us disgusting British hags with the sole purpose of finding a nice Russian woman, and says he has dated around 200 of them since moving out there, but has settled down with his 26-year-old wife Katia, who is "deliberately unemployed".

"Obviously my mum is English and not like this – but in general, I think British women are entitled, overweight and less feminine," Richard, whose mother must be so proud, said. "“They want a guy who is successful, good-looking and chivalrous even though they don’t have much to offer in return.

"And they want the man to be a gentleman even though they refuse to fulfil the traditional role of the woman in the household and take care of their looks. English women just think they deserve to be with a man like that."

Richard, who is obviously far from being self-entitled himself, also said that compared to British women, Russian women are more refined: "Meanwhile Eastern European women are gorgeous, ladylike, accomplished and have traditional family values. They are much more straightforward, refined and in control of themselves – you won’t see them swearing, getting drunk in a nightclub or going home with someone on the first date like most British girls. And obviously, looks and beauty play a huge factor too. Tall and thin girls are the norm in Eastern European countries."

Yes, because men aren't gross at all. Sigh.

We can see why Richard's such a hit with the ladies. Absolute charmer.

Would you date Richard - if you were lucky enough to be the chosen one, obviously. Let us know: @sofeminineUK

Every Hole's A Goal! Introducing The New Three-Holed Sex Toy For Men