by Pascale Day Published on 1 October 2015 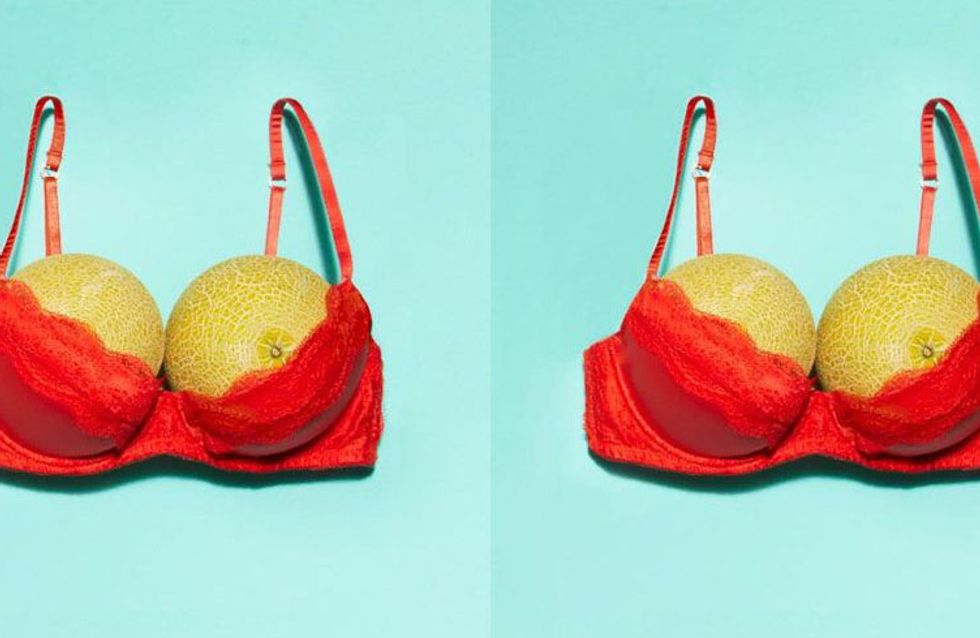 Hey ladies: we all know that having boobs is seriously great right? They just have a way of surprising you in the best ways - take puberty for example. One day there’s nothing and then BOOM: it’s tit city right there on your chest. And once they’re there you love them more than anything, which is why we need to make sure look after them. Here’s some weird er, titbits you should probably know about your breasts.

1. Your nipples can have orgasms

Or nipplegasms, if you will. Isn’t that great news? As if we needed any more erogenous zones! Some people don’t believe in nipple play. We say, start believing sister. Y’see, when your nipples are stimulated, oxytocin is released, which causes more blood to flow to your genitals and leads to vaginal contractions. In more sexy terms, the big O-G: the female orgasm.

2. Men can get breast cancer too

Yup, you saw correct. Men can get breast cancer. It’s really rare, but definitely still possible. For an idea of how rare it is, there are about 350 men diagnosed with breast cancer in the UK, compared to around 50,000 cases of breast cancer in women. A lot of the info when it comes to breast cancer in women can be applied to men, and the same goes for the treatment. So if your man has a suspicious lump, make sure you send him straight to the doctors because, as we learn with so many things, nothing is impossible.

If you’ve looked at enough boobs in your life, you’ll realise no two are the same. Not even your own. This applies to nipples as well. In fact, there are actually eight different kinds of nipple. Eight. These are as follows: Normal, flat, puffy, short, long, inverted grade 1, inverted grade 2, and inverted grade 3.

Then there are unilateral nipples, which means one is inverted and one isn’t. Despite the fact that one category is called ‘normal’, one nipple study indicated that up to 35% of women have nipples that don’t protrude well, meaning that ‘abnormal’ nipples are actually a pretty common occurrence. Which is confusing, but great.

4. Third nipples are more common in men than women

Which is a fact that doesn’t seem that strange when you realise that men’s other two nipples are redundant anyway. Third nipples, which can also be referred to as ‘triple nipple’ or ‘accessory nipple’ (I’m still unsure about this term - accessory nipple as in ‘third nipples are the new tote’?), occur in 1 in 18 males, but only 1 in 50 females. So don’t be embarrassed about your nubbin, lads. It’s more common than you think.

5. How you sleep affects your boobs in a big way

Y’know that rumour that always went round the girls at school - just as your boobs are about to plump out, and your mum can finally stop asking you why the house toilet paper always runs out so quickly - that if you sleep face down, your boobs won’t grow? Well it’s true! Kinda. According to this CNN report, the only way to maintain perky breasts is to sleep on your back. All other positions - foetal, on your side, on your stomach - are going to make monsters out of your mammaries. Seriously. They’re going to look like a pair of basset hound ears. Take your bra off at the end of a long day and they’ll roll out onto the floor like the red carpet at the Oscars. So what’s more important to you for the rest of your life: a good night’s sleep, or a top notch pair of tits? It’s a toughy.

6. Your boobs can carry on growing past puberty

HALLELUJAH AND REJOICE SMALL-BOOBED WOMEN! There is hope for you yet! Planned Parenthood Toronto say in this boob 101 that your breasts can carry on growing in your late teens, and even into your 20s. So don’t worry twentysomethings, you’ve still got time to push out some giant puppies! Thirtysomethings I’m sorry.

7. Scientists still don’t know why women have full breasts all the time

This is actually one of life’s greatest mysteries. Primates have full breasts when they are breastfeeding their young, but that’s it. Women have milk in their breasts for breastfeeding, but all other times the breast is mostly made up of fat and breast tissue. But damnit, scientists just cannot figure out why! What’s up science??! WHAT IS HAPPENING?!

8. There are quite a few different types of breast cancer

Scary, right? Breast cancer is not just one thing. It’s an umbrella term for a number of different types of cancer that can affect your breast. It’s quite a list, so here goes: Ductal Carcinoma in Situ, Invasive Ductal Carcinoma, Triple Negative Breast Cancer, Inflammatory Breast Cancer and Metastatic Breast Cancer. There are some other, rarer types of cancer that you can see here. Whatever the case, it’s important to check your breasts regularly, ladies!

9. Apparently men who like big boobs are less financially secure

10. Your boobs can fluctuate in size all the time

There’s so many different things that can change your boob size. For instance, as your oestrogen levels rise during ovulation, you’ll experience a rush a blood to the boobs, making them fuller. Certain medications have the same effect, such as birth control. Strangely, spider bites can make your lady lumps swell, which definitely puts the ‘creep’ in creepy crawly, the pervy old blighters. Putting on weight will also make them bigger, because the stuff that makes up your breasts includes fat, so more fat means more boob. That’s a good enough reason to keep eating the office doughnuts, right?

Have you got any other weird boob facts? Let us know! @sofeminineUK​