Quit Smoking Timeline: The Health Benefits Of A Smoke-free Life 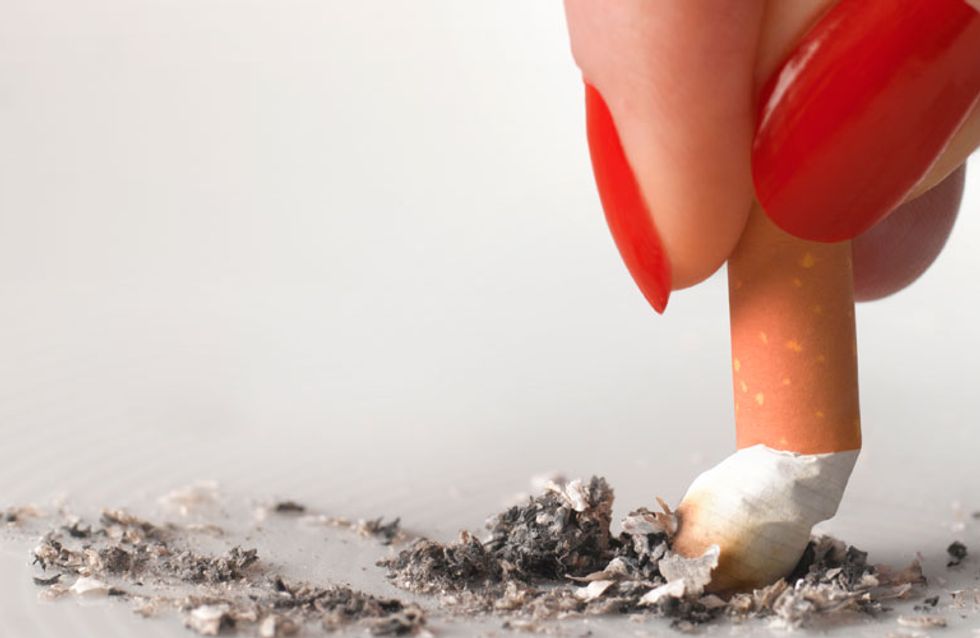 Winding down and relaxing without a cigarette may seem like a totally unrealistic goal to begin with but once you battle through the nicotine cravings and frustration, you'll find quitting smoking is a lot easier than you thought. You'll look and feel 10 years younger, dramatically reduce your risk of a heart attack, stroke and cancer, smell gorgeous and be better off to start a family! (And that's not even half of it.)

Quitting smoking is no easy feat, but once you surpass the dark days of quitting (i.e. withdrawals symptoms *shudder) you'll see that the benefits of stopping are actually far greater than they are otherwise.

Curious to find out how many tobacco-free days it will take to no longer be at risk of the dangers? If you decided it’s time to quit smoking then you gotta learn what kind of withdrawal symptoms are involved, and what benefits you get out of them. Some days you might feel like banging your head against the wall, but once you battle your symptoms you'll feel like you can conquer anything.

Besides, with more money in your wallet, skin of a 20-something year old, reduced risks of ailments and health problems, a boosted libido and fertility, well gee, you'll be feeling like you're on top of the world!

We got chatting to tobacco control project manager, Melody Holt and consultant dermatologist and professor, Dr. Nick Lowe to tell us the greatest perks of living a smoke-free life and they're pretty sweet! But only YOU have complete control over your smoking.

So how about a sneak peek into the future? If you quit smoking right now (yep, right now) this is what your smoke-free life would be like. From 20 minutes on to 10 years forward, here's how quitting ciggys could change your life.

Your blood pressure and pulse rate will return to normal. Circulation improves in hands and feet, making them warmer. While your complexion isn’t going to look like your fellow non-smokers, your skin may appear less irritated and red.

During the early stages, your nicotine cravings will start to kick in. You might become drowsy, frustrated and hungry. So put your brave face on and battle it on (trust us, this is the hardest part). On a much lighter note, you might be saving someone’s life.

How? Every year 40,000 people die from second-hand smoke, which is something you and thousands of other smokers are 100% responsible for, whether it's admitted or not. All that smokey gunk travels downwards and no one asks to get a whiff of it. But now that you’re 20 minutes into quitting, you’ve just made a lotta people’s air a whole lot purer and potentially saved their lives (including your own). Win-win for everybody.

Nicotine and carbon monoxide levels in the blood will be cut by half and oxygen levels will return to normal. Chances of a heart attack start to fall. Dying for a cigarette? There’s no point in punishing yourself and others. Smoking doesn’t do anything to make this world a better place.

In the meantime, keep in mind that it's not just your health being affected by smoking, it's your appearance too. Dr. Nick Lowe says that smokers look generally 5-10 years older.

He says, "Smoking reduces blood flow in many parts of the body, including the skin so if you look at a heavy smoker or even a modest smoker you’ll see that many of them have poor circulation, their skin doesn’t look pink and healthy if they’re Caucasian, they will often have a pallor to the skin and in some instances they actually get a blueish tinge on the lips and nose."​ Enough to put you off? Hope so.

The level of carbon monoxide in your body will be that of a non-smoker and your lungs will start to clear out mucus and other smoking debris. Finally, the mental fog begins to clear. Keep busy; there will be times when lighting up is the only thing on your mind especially when boredom strikes. Go for a swim, hang out with friends or take up a new hobby. Make "out of sight, out of mind" your new motto.

Your body is becoming free of nicotine and your sense of taste and smell is improving. Your nerve-endings will start to re-grow too. Your body is thanking you; it’s giving back what it never had. Now you can take pleasure in the small things, like freshly bloomed flowers in spring or homemade cinnamon rolls. Once you start appreciating life’s simple pleasures, you'll be a much happier person. Seriously, it's a new you!

The nicotine should be completely flushed out of your system by now, you should be breathing more easily. Airway passages in the lungs begin to relax. Energy levels increase. This is a major sigh of relief for your body, but be prepared, because withdrawal symptoms tend to be at their worst during this stage.

Look out for headaches, nausea, cramps or anxiety. You may think you’d love nothing but a smoke right now, but what you really need is a treat! All that dough you've saved on cigarettes these past three days can be spent on something way more worthy. So go on, treat yourself.

Your circulation is improving, making walking easier. After two weeks of quitting your hair and clothes will be near enough smoke-free and those painstaking withdrawal symptoms? They’re gone! The smoking fast is complete.

Physically you’re feeling great. You can start enjoying exercise just as much as everyone else with no feelings of breathlessness or sickness. Hooray!

When it comes to skin woes that tobacco zombies suffer from, Dr. Nick Lowe reassures that damage can be fixed if you take the right steps. He says, "Smokers tend to get larger pores so when you give-up smoking you tend to see a major improvement after about 3 months, occasionally a bit earlier and what we’ll often do is give them some prescription and non-prescription creams to improve the skin quality more quickly."

Are you looking pale and ashy? As a smoker it's not uncommon for your skin to look ashen, but once you finally quit the damage is almost reversible. To help add that glow back to your skin try Dr. Nick Lowe's The Secret Is Out Day Cream and Lift and Repair Night Cream. Use this with the Super Light Tone Perfector and you'll begin to see a major difference in your complexion.

Your lung function has increased by up to 10%. That means less coughing and wheezing and fewer breathing problems. Congratulations for making it this far. You’ve done a swell job at helping to restrain corrupt tobacco companies from flourishing (and saved a boatload of dollars while you’re at it).

You may feel like your sex drive has increased, but this doesn’t come as much of a surprise. One year after quitting your libido will have increased greatly and if you’re trying for a baby you’re in even more luck. While your risk of a miscarriage is greatly reduced, quitting smoking also helps boost your fertility.

Reversing your skin's damage completely only takes about one year. Not bad considering you've probably smoked for many years, right? ​"After a year or so, particularly if they use creams regularly and a prescription Retin-A like cream at night, they will begin to see an increase in collagen, reduced wrinkling, and a reduction in some sagging," says Dr. Nick Lowe.

Your risk of getting lung cancer is halved and your risk of having a heart attack is the same as if you’d never smoked. Did you know that 90% of lung cancers are down to smoking? And if you thought that was the only cancer you had to worry about don’t fool yourself. Smokers are more prone to develop cancers in the mouth, throat, bladder and kidney. Sounds scary, but when you’re 10 years out of smoking your risk is almost comparable to that of a non-smoker’s!

Since quitting, you've given yourself years more life to enjoy. According to the American Heart Association, non-smokers live 14 years longer than smokers. And if that's not enough to make you proud then when you take on parenthood you definitely will be. Although many smokers don't realize, their unborn baby is at risk. Research has found that babies who have smoking parents tend to have more complications. If you've quit a number of years ago your baby’s risk of being a stillborn and suffering from Sudden Infant Death Syndrome (SIDS) is dramatically reduced. Phew!

Start stubbing out those ciggies, girls! A smoke-free life is a happier life. Have these healthy benefits made you think twice about quitting for good? Tweet us @sofeminineUK