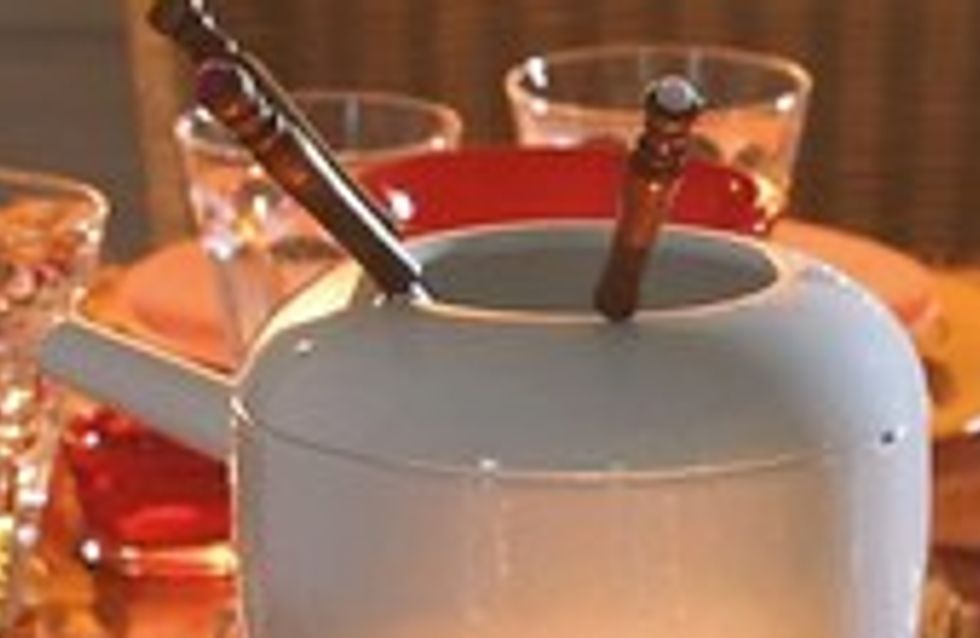 We all dream of recreating delicious fondue worthy of a restaurant in the French Alps. Here's our guide to making the many varieties of cheese fondue. It's so easy, as long as you follow the right rules, use the right cheese and have the right equipment.

>> Method
Start by rubbing a caquelon (fondue pot) with a clove of garlic. Heat the white wine with the cornflour. Add the chopped cheese and let it melt, constantly stirring in a figure of 8 with a wooden spoon. Once the mixture is even, gradually add a dash of kirsch and bicarbonate of soda. Add pepper and serve at a moderate heat.

Note that certain cheeses harden quickly, especially hard cheeses... you need to cook these over a medium heat. On the other hand, some soft cheeses don’t stand up to heat very well, so choose your cheese and cook it accordingly.

Your fondue should stay even, with a semi-liquid appearance, and shouldn’t form lumps when you dip the bread in.

>> Ingredients to add to the cheese
Bread
You can’t have fondue without bread, preferably hard bread. A couple of days before you plan on having your fondue, buy fresh bread (baguette is perfect) and leave it to go hard.

Garlic
Use a clove of garlic to rub your fondue pot with before adding the cheese. This adds flavour to your fondue. It might not seem like much, but it’s vital!

White wine
This adds aroma and a bit of liquid to the mixture. Be careful not to put in too much though!

Type of fondueIngredients and quantities for 4 to 6 people
(+ 1 garlic clove, 1 pinch bicarbonate of soda and 1 teaspoon cornflour added to each recipe)Savoy

Fribourgeoise half and half

Base of your choice with wine and garlic + 100g fresh cèpe or morel mushrooms (or 30g dried then rehydrated), or 1 tablespoon finely chopped truffles, 30ml kirsch

Digestion
Make sure that you don’t scrape out the pot, even if it’s really tempting: what ‘s left at the bottom is very well-cooked fatty cheese which is basically a mission to digest!

Like us on Facebook!
You might also like
Delicious ideas for a romantic Valentine's dinner
by Charlotte Hoddge
Delicious ideas for Pancake Day
by Charlotte Hoddge
Get Your Caffeine Fix! All The Coolest Coffee Shops In London
by Lareese Craig
Italian cheese
by the editorial team
Different Types Of Cheese
by the editorial team
This UK Pizza Chain Is Selling A Mac And Cheese Stuffed Crust & We're Not Worthy
by Rose Adams
14 Ways To Revolutionise The Humble Dish That Is Mac And Cheese
by Helen Turnbull
There's A Mac 'N' Cheese Festival Happening In The UK Next Month
by Pascale Day
19 Awesome Foods You Need To Deep Fry Right This Second
by the editorial team
16 Winter Smoothies You Need In Your Life Right Now
by Pascale Day