by the editorial team Published on 5 August 2015 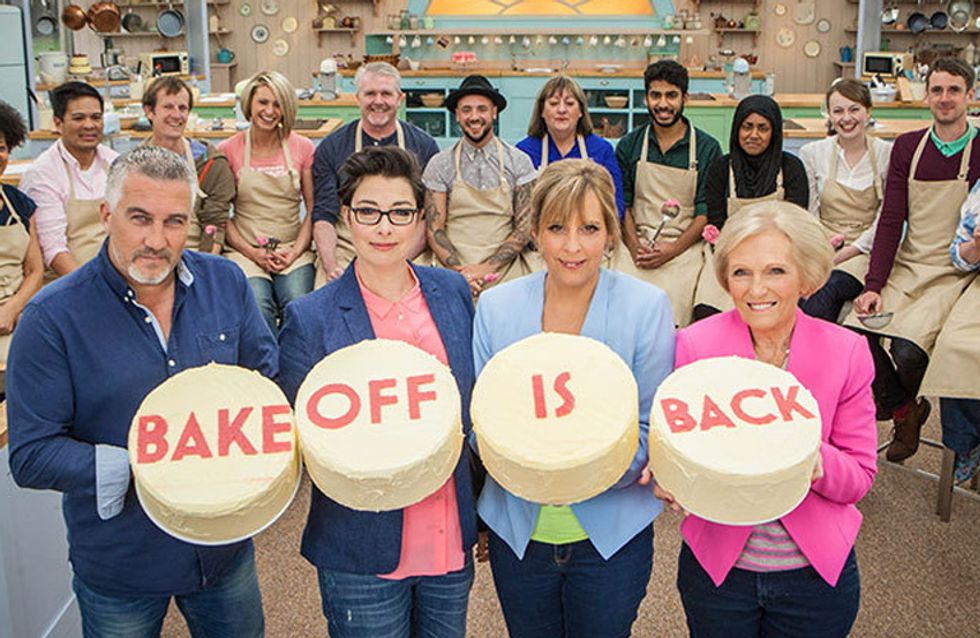 Don't know if you've heard but The Great British Bake Off is back on our screens and we couldn't be more excited. If you think this show is just watching people bake while Mel and Sue test the limits of acceptable broadcasting with their cake based innuendo you are so, SO WRONG. The show has more scandal than a Christmas episode of Eastenders and we're going to run you through it. #BinGate anyone?

If you don't already watch The Great British Bake Off , what are you doing with your life. It's a combination of Mel and Sue, cakes, Paul Hollywood and MARY BERRY! That alone should sell it to you, and if it doesn't then the drama will. So to celebrate the return of GBBO we have put together the biggest scandals from the show.

Thank you British Bake Off for so many great scandals, we can't wait for the 2015 dramas.

"Why would you take icecream out the freezer? " So many questions!!

So here's the lowdown on #bingate. Contestant Iain Watters threw his baked alaska in the bin, after being "sabotaged" by fellow contestant Diana Beard who took it out of the freezer.

Yes! Never did we think a guy throwing something in the bin could cause so much drama. The whole world went crazy, ok maybe not the whole world, but "Justice For Iain" groups sprang up on Facebook, 800 people complained to Ofcom, Iain appeared on Newsnight, and of course plenty of meme's were made. So. Much. Drama.

Not only have we had sabotaged, but The Great British Bake Off as also given us theft. Custard theft to be correct. Who knew bakers could be so evil. Deborah Manger, who on first impression seemed like the nicest person ever, "accidentally" stole rival Howard's prized custard.

It was a serious case of baking burglary.

We've all done it right, used salt instead of sugar. But unfortunately for John he did it on telly and then served it to Paul Hollywood. FAIL!

Paul literally spat out the the salty rum babas, and warned Mary Berry not to try it. We all felt his pain.

But because The Great British Bake Off is the best show ever, it took us on an emotional rollacoaster, with John eventually proving himself and winning the show. Tears all round.

So we have had sabotaged, theft, triumph now for some love...

After months of being accused of flirting with Paul Hollywood, Great British Bake Off favourite Ruby Tandoh, came out on twitter, and did so in style. Posting the a video of Diana Ross's hit song, I'm Coming Out.

However Paul Hollywood wasn't pleased with Ruby's coming out tweet. He responded saying "@rubytandoh very happy for you Ruby… but why do you feel it necessary bringing me into your announcement?" Way to ruin a moment, Paul.

Out and out filth

Yes you read that right filth. We knew food and sex go hand in hand sometimes, but gosh these bakers are filthy...especially Mary Berry.

The show is filled with sexual innuendos, who knew the Beeb had it in 'em.

Will you be watching The Great British Bake Off? Tweet us @sofeminineUK!

The Craziest Food Hybrids Ever: Genius Or Just Gross?
​

Follow us on Instagram!
You might also like
Delicious ideas for a romantic Valentine's dinner
by Charlotte Hoddge
Delicious ideas for Pancake Day
by Charlotte Hoddge
Get Your Caffeine Fix! All The Coolest Coffee Shops In London
by Lareese Craig
London's Most Instagrammable Bars
by Helen Turnbull
100 Low-calorie Snacks Under 100 Calories
by the editorial team
The 8 Great British Bake Off cookbooks you need in your life
by Maria Bell
The Great British Bake Off Video Mary Berry Doesn't Want You To See
by Maria Bell
British Sausage Week: 10 Divine Ways To Eat Your Sausage
by Vivian KELLY
The Great Penguin Bookchase
by the editorial team
This Talented Artist Recreates Famous Paintings On Cakes And It's Amazing
by the editorial team