1D's Niall Horan and Laura Whitmore go home together at 3am

TV presenter Laura Whitmore may have been planning to have a night in with the girls but things clearly took a different direction as she was spotted leaving a nightclub with One Direction heartthrob Niall Horan in the early hours.

One Direction's Niall Horan and TV presenter Laura Whitmore were spotted getting into a taxi together after a night out at Whisky Mist nightclub on Wednesday night.

The blonde pair looked like they'd had a great night partying into the early hours of the morning, only exiting the club at 3am.

The 27-year-old beauty has become close pals with her fellow Irishman but has assured fans that they are not an item.

Facing some serious Twitter abuse from loyal 1D fans earlier in the year, Laura posted a message to set the record straight.

She said: "Niall is my lil brother from another mother, RELAX one direction fans. You honestly have NOTHING to worry about x."

They must be good friends as they both went from the club to a private address in central London.

Niall, 19, popped out of the house quickly to put a parking permit on his Range Rover outside.

For all those sceptical Niall admirers, Laura subtly let fans know that Niall may have stayed over but he was sleeping on the sofa.

She tweeted: "Never let your friend sleep on your couch out of good will.. He will wear your underwear when you're not home."

Niall's partner in crime, Eoghan McDermott, posted a photo of the two of them with Laura's underwear on their heads!

This isn't the first time Niall's got mischievous with Laura's underwear.

A few months back he and the same pal taunted Laura on Twitter with a photo of themselves wearing her underwear.

This was after she wrote: "So @eoghanmcdermo and @Niallofficial are apparently in my flat and i'm not there... Stay out of my knicker drawer ya dirty feckers!!!!"

They responded: "Too late."

This time the caption for the photo read: "​Sorry @thewhitmore - we did it again. We took it up a level."

Why are you so obsessed with Laura's knickers, guys...? 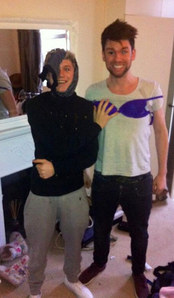