Cara Delevingne has already let the world know how keen she is to take on a career in music and last night the crowds at the DKNY #artworks launch got a sneak preview of her singing. The supermodel nabbed the mic off her best pal Rita Ora during her performance before gyrating up against her 'wifey'.

Cara Delevingne is familiar with being centre of attention and last night she made the most of her moment up on stage with best mate Rita Ora.

Pop star Rita, 22, was performing at the #dknyarts launch and her supermodel pal was dancing around and enjoying her tunes.

The blonde singer's biggest fan, Cara then joined her centre stage and started gyrating up against her.

The girls were dirty dancing away before the 20-year-old model stole the microphone out of her friend's hand.

Confident as they come, the big-browed lady was loving her chance to show off her singing skills.

Rita looked on with pride as Cara refused to hand back the bright red mic. 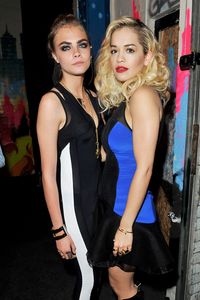 She eventually got it back and finished off her song while the leggy model carried on dancing.

The girls then showed off their hip hop knowledge as they rapped along to Notorious BIG's Juicy.​

Professor Green, who attended alongside fiancée Millie Mackintosh, was also pretty excited about the show but complained he wasn’t allowed to see their sexy moves.

He tweeted: "So @RitaOra is dancing with Cara, the birds enjoying it but I'm not allowed to look. #doublestandards."

The girls were equally playful with one another on the red carpet on the way into the event.

They posed with their arms around each other as well as side by side.

Check out the video - Cara's actually got a pretty good voice.

What do you think or Cara's pipes? Tweet us @sofeminineUK