Our favourite football star has spoken about his dedication to his family. He doesn't want growing up with such famous parents to have any negative affect on his brood and tries to give them everything other children have.

They're the offspring of one of the most famous couples in the world, so it's no surprise that it's difficult for David and Victoria Beckham's children to lead a completely "normal life".

​The hunky footballer recently spoke about the efforts he and his wife make to let their kids enjoy as much normality as they can.

The couple's eldest child, Brooklyn, recently turned 14 - so the super-couple are facing new challenges in terms of his desire for some teenage freedom.

​"You have to explain it to him that there are certain things that he can't do.

​"But to be honest, with our children, we let them do 99 per cent of the things they want to do because we want them to lead a normal life."

​The 38-year-old admitted that he has to spend a lot of time away from his fashion designer wife and children, who also include Romeo, 10, Cruz, eight, and one-year-old daughter Harper.

​With David Beckham's latest signing to French team Paris St Germain, he's splitting his time between his new home in London and his job in Paris.

​Although he would love to have the chance to spend more time with his family, he's content to put them first by working hard and providing.

​He explained: "When you speak about the sacrifices, that's obviously the sacrifice that I have to make as a father and as a husband, being away from my family.

David, we'd love it if you could spend more time in London and therefore up our chances of spotting you out and about... 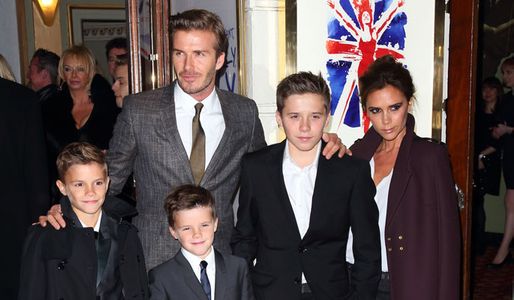