The Emmy Award winning Downton Abbey had previously revealed plans to cast the show's first black character. It's now been officially announced that this will be Jack Ross, who will be played by actor Gary Carr.

We first learnt of the role back in February, when the casting notes were leaked.

The Sun managed to obtain a copy of the criteria of the show's new role, which described the character as “male, 25-30. A musician (singer) at an exclusive club in the 20s.

“He’s black and very handsome. A real man (not a boy) with charm and charisma.”

Importantly, whoever lands the role should “ideally be able to sing brilliantly”.

The notes added: “Overall he should be a very attractive man with a certain wow factor.”

ITV and Carnival Films - the people behind the award winning period drama - announced that Gary, who has previously appeared in Death In Paradise and Bluestone 42 has joined the cast.

"His addition will bring interesting twists to the drama which we can’t wait for viewers to see in Series 4.”

Downton fans can look forward to another eight-part series as well as the annual special feature length Christmas episode.

Whether it will be as happy as series two's or as sad as series three's, they won't tell us!

The series will deal with the aftermath of the tragic death of Dan Stevens' character Matthew Crawley as the family take on the next stage of history. 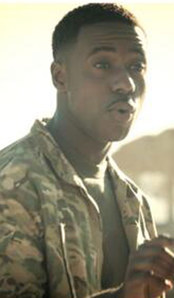