Keeping track of Lindsay Lohan is pretty hard, but chances are you're not going to find her in court. Last night, reportedly instead of attending a court appearance, Lindsay chose to be interviewed on David Letterman's The Late Show to promote the latest Scary Movie. But David had some other, more personal, questions for her.

We've all been wondering when Lindsay Lohan would actually be entering rehab after she was ordered to receive treatment by a court of law last month.

And on last night's episode of The Late Show With David Letterman we finally got our answer - 2nd May - after Lindsay gave a rare TV interview.

Lindsay was reportedly meant to be at a deposition hearing at the time but allegedly chose to attend the chat show rather than appear in court.

Host David Letterman seemed to have a good repartee with troubled Lindsay and so it wasn't long before he chose to press her on her impending treatment.

But the exchange started off awkwardly when David asked her about her three months of court-ordered rehab.

She replied:​ "We didn't go through this in the pre-interview."

But after some initial defensiveness, Lindsay started joking with David.

She said about her upcoming treatment: "I think this is an opportunity for me to focus on, you know, what I love in life and I don’t think it’s a bad thing."

Lindsay went on to admit she's been to rehab "several" times before addressing her trouble-plagued time in the spotlight.

​ "You grow up, and you mature. And I’ve said that a million times, I know that, but what else am I supposed to say when it’s a process of life?"

Lindsay then described herself as "a target", which led David to praise her for her "poise" and "spine" for coming on his show and facing his questions the way she did.

His kinds words made Lindsay tear up as she admitted she was crying because he was "sweet" to her.

Despite this nice exchange, it was clear that Lindsay wasn't prepared to answer any of David's really tough questions.

When she was asked whether she drinks too much, she had no response and seemed to have no excuse for her repeated out of control behaviour.
​
She was keen to assure people, though, she was not making light of her situation. 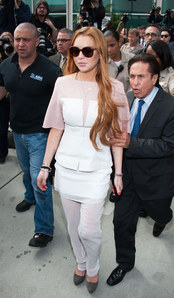