She may be pregnant with their first child but that wasn't stopping Luisana Lopilato from dressing to the nines to accompany her hubby Michael Bublé to the JUNO Awards last night. Could they BE any more perfect?!

Michael Bublé was presenting the JUNO Awards in Saskatchewan last night and the Canadian star looked thrilled to be there with his beautiful wife Luisana Lopilato.

The Argentinian model is used to the spotlight and definitely stole some from her singer husband when she arrived looking stunning in a floor length, red lace gown.

The 25-year-old is expecting their first child and was certainly working her curves in the sexy dress, which was split to her thigh.

The pair revealed their pregnancy in late January but Luisana's bump is still rather modest!

Michael, 37, whose hit I Just Haven't Met You Yet was inspired by his now-wife, looked smitten as ever as the pair posed for photos.

Though he may be famed for his romantic music, Michael recently told Graham Norton that conceiving wasn't as magical as people may have imagined.

He said: "There was nothing sexy about it. My wife is so beautiful, but it wasn't like that. She was very, 'You know what Mike? It's nine o'clock on Tuesday night and we must do it now.'"

Michael Bublé's angry wife threw his clothes in the pool

Michael missed out on any awards for himself at the music bash, with most going to Carly Rae Jepsen - but he didn't seem to care as it seems his impending fatherhood is prize enough.

He recently spoke told Mail Online about his unborn baby: "My wife has been listening to my music while she has been pregnant. She plays my record and plays my songs all the time!

Despite seven massively successful albums under his belt, Michael is confident his baby will be his best work. 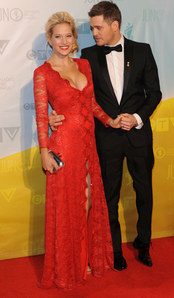 by the editorial team
+
All the news about Michael Bublé