Recently single Selena Gomez was showing no signs of heartache on the red carpet at the MTV Movie Awards 2013. The singing starlet was looking hot in a sparkly gold mini-dress as she arrived ready to perform her new single Come & Get It.

Selena arrived on the red carpet in a revealing gold mini-dress and looked delighted to be there - it didn't seem like she's missing Justin at all!

The Disney princess is set to perform at tonight’s show.

The pint-sized beauty is taking to the stage to sing her new single Come & Get It, which was written by Pitch Perfect star Esther Dean.

Selena took to Twitter earlier as she got pumped for her appearance on the show.

She posted: "MTV Movie Awards tonight I am so excited and nervous for the performance tonight. #comeandgetit #movieawards."

Last week she also got fans excited for the debut of her new track when she tweeted: "A successful first day of rehearsals for the MTV performance this weekend!!! Can't wait for you to see it 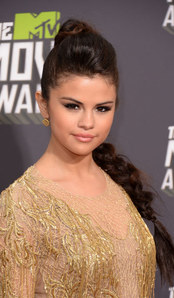 Francesca Menato
…
#Awards
From hair ideas to outifts, look no further for your daily inspiration