Sherlock fans hoping to keep all aspects of the new series a secret - look away now! As filming continues we may have some answers as to how Sherlock managed to come back to life.

TV hypnotist Derren Brown looks set to appear in the next instalment of hit show Sherlock.

Benedict Cumberbatch, who plays the title character, has been seen filming in various parts of the country of late - proving that he somehow managed to escape death at the end of the last series.

Season two closed with Sherlock falling from a building to what was assumed to be his end.

In the latest photos from filming, Martin Freeman - who plays Sherlock's trusty sidekick Dr Watson - is screaming and running to where the detective had fallen.

Before he can reach his friend he collapses and wakes to meet a mysterious, shaved haired man - Derren Brown.

After his encounter with the stranger - during which he performs a classic hand over the eyes move - the doctor then falls to the ground once again.

Derren's character then leaves as suddenly as he entered, putting up his hood and running from the sleeping Watson.

It's as yet unknown whether Derren Brown will appear in any other part of the show or if this will be a flashback scene, explaining Sherlock's return to the land of the living.

Sherlock's great trick is said to be based on the Arthur Conan Doyle story The Adventure Of The Empty House.

Writer Mark Gatis said: "It'll be a version of it, because that's the one in which [Sherlock] returns.

"How much or how little [we change], I don't know yet.

"As before, we cherry pick and we choose bits and pieces of other [stories] that we like. They're always less literal adaptations."

Sherlock is due to air at the end of the year. 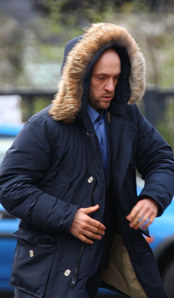