Olivia Colman fought back the tears after being awarded best Supporting Actress for her role in The Accused alongside her best Female Performance In A Comedy award and ensemble win with Twenty Twelve for best Situational Comedy.

Olivia Colman couldn't help but get overwhelmed by the occasion when she took home the prize for best Supporting Actress for her role in The Accused at the BAFTA TV awards tonight.

​The Broadchurch star took a few moments to collect herself as she told the audience: "Turns out it does mean a lot."

​She then looked to presenter Graham Norton to say: "I'm not going to cry", after he joked during his introduction speech about her tendency to well up.

​Olivia went on to give great thanks to her co-star Anne Marie Duff who she promised to "give a little squish" after coming off stage.

​The 39-year-old continued to gush over her fellow actress.

​She said: "This is for Anne Marie and me to share, we call ourselves Anne Olivia Col-Muff." 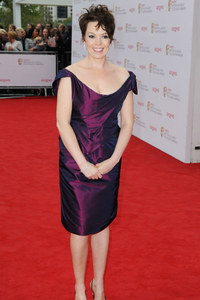 ​Making her further thanks, she remembered to give a shout out to her first drama teacher as well as her "husband and best friend".

She went on to joke to her children watching at home: "It looked like I said a bad word - I didn't I said fudge."

​It was based on the organisation of the Olympics and proved a huge hit with the public and critics alike.

Olivia went on to beat fellow Twenty Twelve actress Jessica Hynes, plus Julia Davis from Hunderby and the nation's favourite Miranda Hart to take home the prize for best Female Performance In A Comedy.

Ever the humble recipient, Olivia was slightly lost for words and apologised to her fellow nominees: "Three girls that I just love."

​She told the crowd: "I really didn't expect this, thank you so much.

​"I'm not even the funniest one in our programme!"

​Despite playing down her comedy abilities, she hilariously took her opportunity back on stage to thank the director of The Accused.

​Utilising her moment to look at the audience of fellow stars she then commented: "There are so many lovely people here."

​And after getting somewhat starstruck by the sight of Matt Le Blanc, she said: "Oh, I've just seen Matthew from Friends!"

​She finished her speech by simply telling everybody: "This is a really lovely evening."

Congrats, Olivia! We love you!