It's hard to believe Lamar Odom and Khloe Kardashian have been married for four years. That's likely because their initial courtship was so quick that they've been wed almost as long as they've known one another. But no longer. The E! reality star filed for divorce from the NBA star last week, and he's been seen around town looking gaunt. And sad. Obviously.

We were all a bit surprised and saddened when the news surfaced that Khloe Kardashian had filed for divorce from Lamar Odom. Sure, it's not always shocking when a Hollywood marriage is headed for splitsville, but for some reason we thought these two could weather the storm.

Apparently not, as Khloe has filed court documents with high profile American attorney Laura Wasser, the same lawyer who represented sister Kim during her divorce from husband Kris Humphries. Khloe cited "irreconcilable differences" as the reason for the split.

The couple seemed mostly happy and grounded until rumours of Lamar's drug use (and abuse) arose over the summer.

Lamar was spotted yesterday in LA, looking thinner than usual. He is reportedly focusing on basketball and throwing himself into training.

Khloe has a huge support system to help her get through this, with her mother at the helm.

Speaking of her daughter, matriarch Kris Kardashian told E! News, "She's got such a big heart but she also is very sensitive. She's got that tougher exterior and sensitive inside, but she's good. She's got all of us all around her and I'll see her later, and yeah, she's good. I was with her yesterday and she's a gift. She's one of my biggest blessings. I think that when you have a tough decision to make and you finally make it, it's always a relief to come through that process, but it is a process. So we'll see."

Together or apart, we wish these two the very best.

Do you think there's any hope for reconciliation? Tweet us @sofeminineUK. 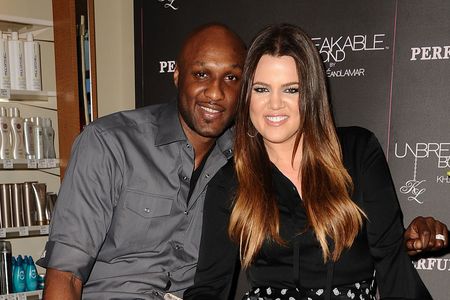