by Helen Turnbull Published on 14 March 2017 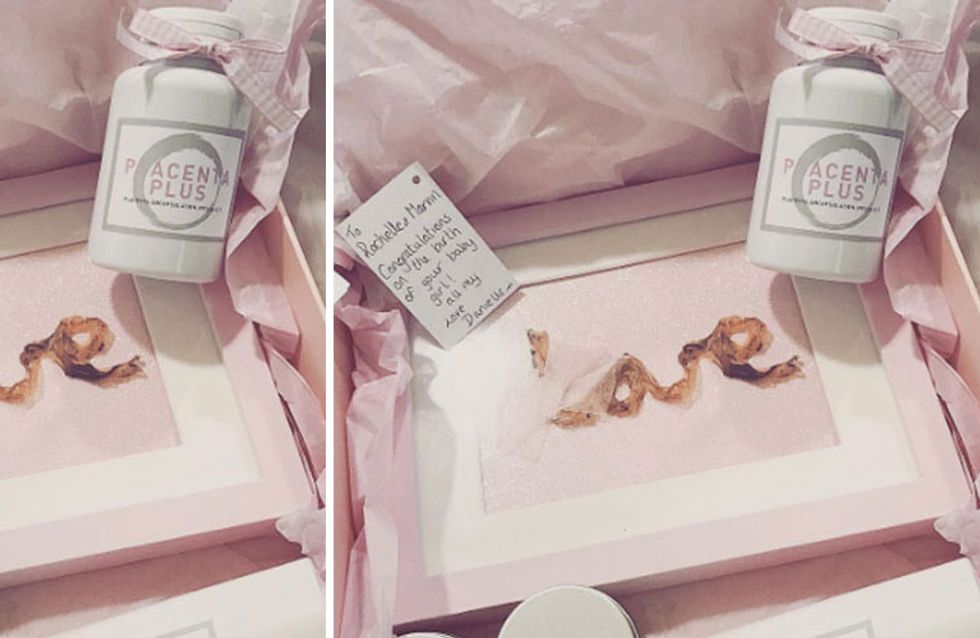 Parenting can be a minefield - even more so for celebrity mums and dads. Rochelle Humes - the former Saturdays singer and Ninja Warrior UK presenter - is the latest culprit to fall victim to parenting-related controversy courtesy of the Internet. The mother-of-two - who gave birth to her second daughter Valentina Raine on Friday - has divided the people of Instagram with her artistic keepsake of her baby girl's umbilical cord.

Rochelle Humes has paid the ultimate tribute to her newborn baby daughter Valentina Raine - who was born on Friday - by framing her umbilical cord. Naturally, the people of the Internet were equally disgusted and amazed when the former Saturdays singer shared the artistic keepsake on her Instagram page earlier in the week.

Rochelle, 27, uploaded a photo of the custom-made design - Valentina's umbilical cord twisted into the word 'love' and mounted into a baby pink, wooden frame - onto the photo-sharing site, only for it to spark a passionate debate in the comments. "After being very curious I took the plunge, so excited to feel the benefits..Thanks so much Danielle @placentaplus ???," she captioned the image which also featured a tub of placenta pills.

After being very curious I took the plunge, so excited to feel the benefits..Thanks so much Danielle @placentaplus ???

The photo divided users of the social network with many applauding the new mum's decision to honour the new addition to the family in such a creative fashion. One wrote: "Gonna get pregnant just for this" while another commented: "I think this is beautiful. People judging and having utter disgust... have you ever carried a child. The placenta kept your little one healthy why would you not want to frame it. Amazing idea

." "This is wonderful! Wish I had done it with my babies! Well done for not being afraid to step away from the norm," another gushed

But some commenters weren't so kind with many rushing to share their disgust. One simply wrote: "Actual vomit" with another adding: "Ridiculous on another level!"

Rochelle is maintaining a dignified silence and is yet to address the controversy.

Would you dare do such a thing with your baby's umbilical cord? Let us know your creative ideas @soFeminineUK

Advice For New Parents: Things Every Parent Needs To Know About Newborns

​10 Game Changing Products For New Parents
by Helen Turnbull
From hair ideas to outifts, look no further for your daily inspiration