Starbucks Unicorn Frappuccinos Are REAL And They're On Their Way 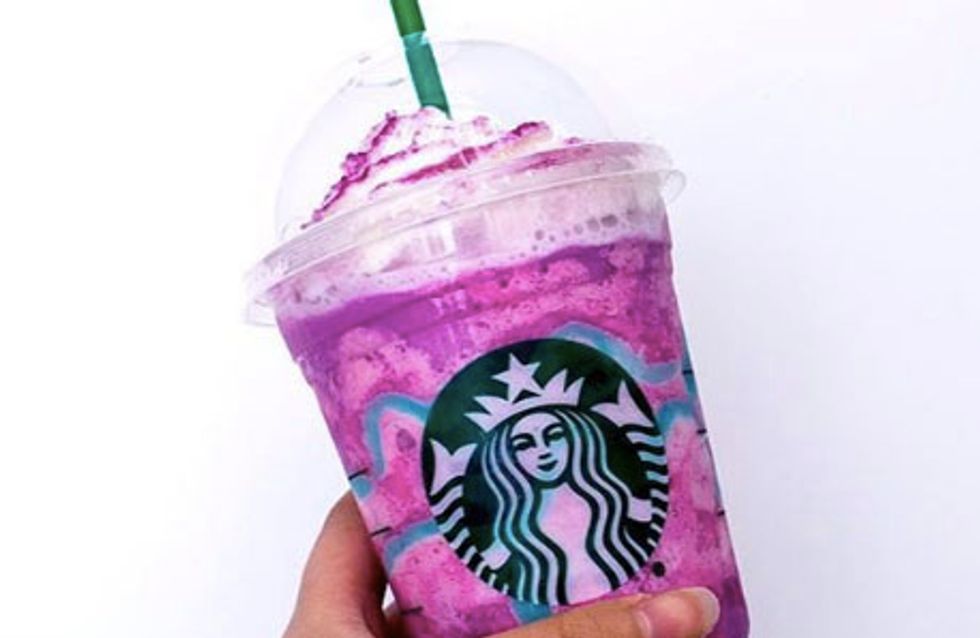 People love Starbucks. People love unicorns. So it was only a matter of time before these two joined forces and created something so delicious, so majestic, so magical that we'll be throwing an entire month's wages at daily frappuccinos. Oh we wish we were exaggerating but the bank statements will speak for themselves.

In 2017, all the best foods come in unicorn colours. Easter eggs, hot chocolate, cheese toasties and bagels, they're all dressed in that mixture of gentle blues, pinks and purples. The only thing missing from that list is an ice cold coffee - UNTIL NOW. Yep, Starbucks have finally got their act together and created the unicorn frappuccino.

Whilst it remains purely conjecture at the moment, a Redditor recently posted a pic with the caption 'Unicorn Frapp topping', and as we all know, if the internet says 'Unicorn Frapp topping' three times then it becomes a real thing. And so began the campaign for a unicorn frappuccino, with Instagram taking the reins as coffee fans began posting pics using the #UnicornFrappuccino hashtag. The colourful drink is a mixture of soft purple and blue, topped with cream and dusted with coloured sprinkles.

Food blogger Mike Fahey managed to get his hands on an early prototype of the drink, as he reviews on his Snacktaku YouTube page. Fahey, who has inside connections to Starbucks (his wife works there), described the rainbow drink as having a sour raspberry flavour which kind of tastes like fresh fruit or mango, but was accompanied by a "horrible sour syrup" and sprinkles of sour sugar on top - definitely a drink for those with a sweet tooth.

There's still no official date that this pretty Frapp is due to hit Starbucks here in the UK, but having already been rolled out in the US, Canada and Mexico, it's bound to arrive over in ol' Blighty soon. We'll wait with bated unicorn breath...

Are you going to get your hands on a Unicorn Frapp? Let us know! @sofeminineUK

Unicorn Pancakes Are A Thing Now Because Of Course They Are

Pascale Day
…
273 shares
From hair ideas to outifts, look no further for your daily inspiration

Like us on Facebook!
You might also like
Delicious ideas for a romantic Valentine's dinner
by Charlotte Hoddge
Delicious ideas for Pancake Day
by Charlotte Hoddge
Get Your Caffeine Fix! All The Coolest Coffee Shops In London
by Lareese Craig
London's Most Instagrammable Bars
by Helen Turnbull
This Is How Rainbow Unicorn Bagels Are Made
by the editorial team
Unicorn Tear Gin Is Here To Make Your G&T Magical AF
by Rose Adams
Starbucks Launch New Coffee That Tastes Like Guinness. Right...
by Maria Bell
Unicorn Pancakes Are A Thing Now Because Of Course They Are
by Helen Turnbull
This Matte Black Latte Will Release Your Inner Goth
by Pascale Day
37 Delicious Cakes Of Instagram: Time To Get Baking!
by Emmy Griffiths