How To Navigate A Wine List: 10 Tips From a Sommelier

by Dagney Pruner Published on 28 November 2014 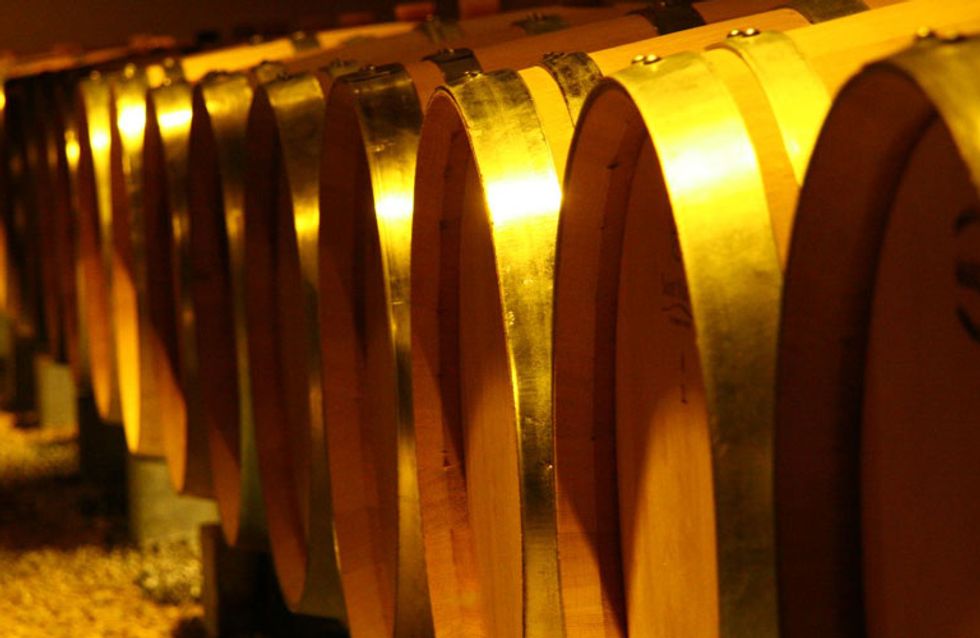 In case you've never heard of the fancy shmancy word "sommelier," it is basically a job where you need to know EVERYTHING about wine. We like wine, that we know for sure, but sometimes we walk into a restaurant and look at the wine list and go WTF?! So we asked one of the pro's to give us all the details on how to navigate those long lists on a budget. Get your corkscrews ready.

When was the last time you walked into a restaurant and the wine list was so extensive and overwhelming that you might as well close your eyes and point to a bottle on the cheap side of the list? If you're like us, that was probably last Saturday night.

Turns out, there are these nifty people called sommeliers and their job is to know literally everything about wine. Like down to exactly what type of soil each grape grows in. That's right, there are humans in this world whose JOB it is to taste and study wines all day long...sigh, a girl can dream.

So we decided to talk to a head sommelier at a top rated private wine club to get some quick tips on how to be cost effective while navigating a wine list, without having to sacrifice fabulous taste of course.

1. If you want bubbles, stick to cava

What girl doesn't love a little bubbly? Typically, it's our first instinct to look at the champagne portion of the menu, but cava, which is made in Spain and from the exact same type of grapes as champagne, and is similar to prosecco, is often much cheaper by the glass and the bottle than the other two options. Bonus: it's often more flavourful too, champagne and prosecco both have a tendency to be very dry.

2. Rose is in season year-round

If you love drinking rose as much as we do, then this is probably the best news you've gotten all day. Even though we think of rose as a summer wine, turns out the grapes are perfectly fine for enjoyment during all the seasons. It more has to do with the type of food you eat.

Lighter and crisper rose, which you can identify by the salmon colour, is the rose you associate with summer made from mostly plush grenache grapes or from the Rhone wine region in the South of France. It tastes great with summer food likes grilled shrimp, fish and chicken.

Deeper roses, which you can tell by their darker and more reddish colour, are great for winter foods like lamb or veal chop, pot stickers and basically anything wrapped in bacon. A good rule of thumb is any vineyard who makes a good pinot noir tends to make a good dark rose. Especially good regions for a cheaper price: Bandol in France, Rioja in Spain and the west coast of America.

A lot of us are bargain hunters, but at what point are we sacrificing taste? According to our expert sommelier, that number is probably £20. You are going to be hard pressed to find a good bottle of wine for under that amount, and if you decide to go by the glass? Stick to a £7 minimum if you want a good tasting vino, which means if you are going to have more than one glass (obvs) it is recommended that you just buy a bottle to be cost effective. Fun fact: most restaurants will let you cork the bottle and take it home with you if you don't finish.

4. Find 8 "value categories" and stick to them

The sommelier recommended picking "value categories" that you get to know well, which can get you through almost any wine list. "Value category" means knowing a type of wine you like from a region that typically has very good taste given its low price. Usually, these wines come from the southern hemisphere because land and labour is so much cheaper, so they can afford to sell wine at a lower price. Places like Argentina, Chile, New Zealand and Australia often have the best value for the cheapest price. Around £40 is probably the sweet spot for these "value" wines.

5. Be weary of popular vineyards

As much as we wish it were limitless, grapes to make wine don't just grow endlessly on vines. Ugh. This means that once a certain line of wine becomes popular at a vineyard, they have to jack up the price just to keep the demand in line with their supply. So even though certain brands may make delicious, popular wine, it is usually overpriced, so ask for the cheaper brand that probably tastes the exact same.

6. Think outside the box (literally) when it comes to white wine

If you are a pretty generic white wine drinker then you probably stick to what you know: sauvignon blanc from New Zealand, pinot or chardonnary from California, and basically anything that says Sancerre, France. Turns out we could be getting more bang for our buck by looking off the beaten path. The sommelier warned us that it was silly to be paying, for example, north of £30 for an American chardonnay when there are much tastier chardonnays from regions like Marsannay in France for almost half the value.

If you like the smoother taste of a sancerre, look more towards the Quinty region of France, which specialises in dry, crisp white wines on the cheaper side. Also, sauv blanc from Chile and Argentina is on the rise, the vines that used to produce it in France over 100 years ago were ripped up and relocated to South America. Bottoms up.

7. Be warned, sommeliers have two jobs: recommending wine AND making their restaurant money

If you are at a nice restaurant they will often have a sommelier on staff to recommend bottles to you. If a sommelier asks you "what do you usually like?" be aware that they can take you for a ride. Wines on the list are already marked up three times retail and it's their job to not just give you the best tasting wine, but also show the restaurant they can sell the expensive stuff. Know the ranges for the type of wine you are describing, and when in doubt, stick to your value categories!

8. If you're looking for a wine to gift, think "Bordeaux petit chateau"

Typically a wine from Bordeaux is on the expensive side, but here'a little trick from our sommelier to you. The Bordeaux region in France is an appellation, which means that it is a legally protected name under which a wine may be sold, indicating that the grapes used are of a specific kind from a specific district, and thus adhere to certain standards. Who knew it wasn't just a type of wine?

Regions like Bordeaux actually produce more wine than the entire country of Australia. So if you're looking for a tasty Bordeaux look for the "petit chateau" which come from the outskirts of the region. They taste just as delicious and sell for £7-£20 per bottle. Best wine gifting trick ever. They are pretty rare and don't really make an appearance on wine lists so keep your eyes peeled for these diamonds in the rough.

9. Don't forget about Spain and Germany

When we think wine, we think Napa or the South of France. Our sommelier warned us that we are probably leaving out some great wines. He named Spain, for both red and white wine, as one of the biggest hot spots of today. He stressed that you can find some of the most satisfaction at the cheapest prices, especially from the Rioja region, which is a great place to look for cozy wines in the winter months.

Also, don't forget Germany, which is famous for their white Riesling. The wine is often a little dry but also on the sweeter side. The best part is you can pair it with basically any food and it's usually not that expensive. Prost! (that's German for cheers).

Winter is coming, so I asked our sommelier to give us one of his favourite wines that we could currently find at a decent price during the cold season. He highly recommended this red for a cabernet or pinot noir drinker. I did some research of my own, and this wine is on the verge of becoming super hot. It is known for its "peppery concentration" and it is recommended that you decant it beforehand. The best part is? It goes for around £12.50 retail. So if you cheap b*tches see one on a wine list, order it girl.

20 Life Hacks To Make Your Paycheck Last All Month

How To Be More Organized: 10 Hacks Every Girl Needs To Know At Work