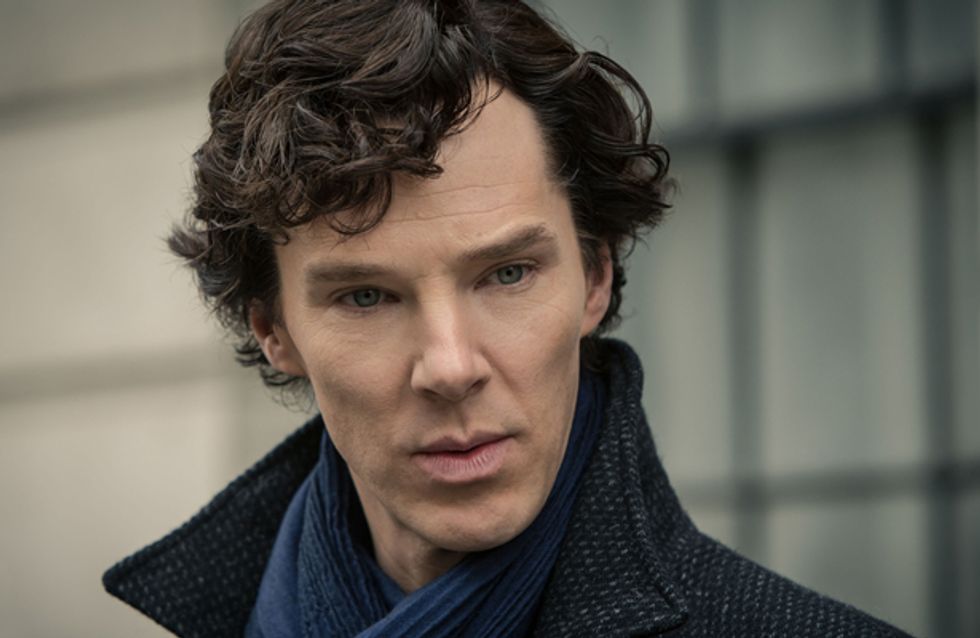 Series three of Sherlock is over, and once again we are plunged into the long wait before it graces our screens again. But what an amazing third season to be left with! Particularly the ending, which should have fans plenty to speculate about now that Sherlock's roof jump as (sort of) been explained! If that isn't enough to satisfy your appetite for Sherlock knowledge, we have put together ten things you never knew about the TV show to keep you warm in the coming months!

10. Dozens of fans knew how Sherlock survived the fall AND DIDN'T TELL US

Dozens of fans watched the entire scene filmed where it is shown how Sherlock survived the fall. They saw the fake blood, the inflatable air mattress, the whole thing. Mark Gatiss said: “we filmed the solution in broad daylight in front of lots of people and nobody said anything. It was even in the papers.”

Steven Moffat also said: “I think it’s also worth saying it was kindness on the part of the papers and the people who were watching that got us away with it to be honest…It was an act of kindness and self-discipline on behalf of the many fans who were there watching.”

When repeatedly asked if Moriarty is fo sho dead at the end of series 3, Moffat said: “He can’t come back from that. He shot himself in the face. What more do you want?”

Turns out that Steven Moffat is a total fibber and we shouldn’t listen to another word he says. Ever.

8. Matt Smith could appear in a future episode

The writer of Sherlock, Steven Moffat, is also the current showrunner for Doctor Who, from which Matt Smith has just departed the series. What’s exciting is that Steven hasn’t ruled out the possibility that Matt could appear in Sherlock in the future! Moffat said in an interview: “If there was a perfect part of Smith, there’s no rule against it.”

Does anyone want to bet he will play “the other [sibling]” that Mycroft mentioned?!

Talk about keeping it in the family! In series three we are introduced to Sherlock and Mycroft’s mum and dad, and the wonderful normality of them shocks both John and us, especially when we found out that they were Benedict Cumberbatch's real mum and dad!

Benedict told the Telegraph that he was “so proud of them” and admitted “it was kind of nerve-wracking.”

6. There is an unaired pilot

A 60 minute pilot was made in 2009, but the BBC decided that they wanted to make it 90 minutes, and asked the team to remake the first episode.

The cast is all completely the same, aside from Sergeant Donovan for some strange reason, and there are a few other key differences. For starters, the cab driver is made much, much creepier. But don’t take our word for it – the incident with the cabbit has been posted on YouTube! Yay!

Benedict Cumberbatch and his girlfriend may have broken up back in 2010, but before their split Olivia Poulet appeared in an episode of Sherlock.

Remember series 1 episode 2, when the office worker finds out that her little hairpin is worth millions and millions of quid? That was her!

3. A fake scene with Moriarty and Mycroft was filmed to throw off fans

There is a small clip that freaked out die hard fans of show everywhere as it showed Moriarty, wearing Sherlock’s coat, and Mycroft meeting outside a building.

They shake hands, then hurriedly part ways, leaving heaven knows how many forums rife with speculation. As it turns out, the whole scene was a ploy to mess with the fans, and probably to teach them a lesson about searching for spoilers!

In the third and final episode of season 3, we get a glimpse of little Sherlock as he retreats into his mind palace after being shot and is reunited with his childhood pet.

But did you know that the role of the mini me was played by none other than Steven Moffat’s own son Louis? He even has the thick black curls that makes him perfect for the part!

The world may have gone crazy for Sherlock’s curly, dark locks, but the naturally-auburn Benedict Cumberbatch is not a fan of the way he has to style his hair for the show. He told The Times: “I can’t think of a wittier or even accurate comparison, but I just think it makes me look a bit like a woman.”

by Emmy Griffiths
#Sherlock
For all the best videos, memes and shareable news!