21 Actors Who Went Slightly Crazy For A Role 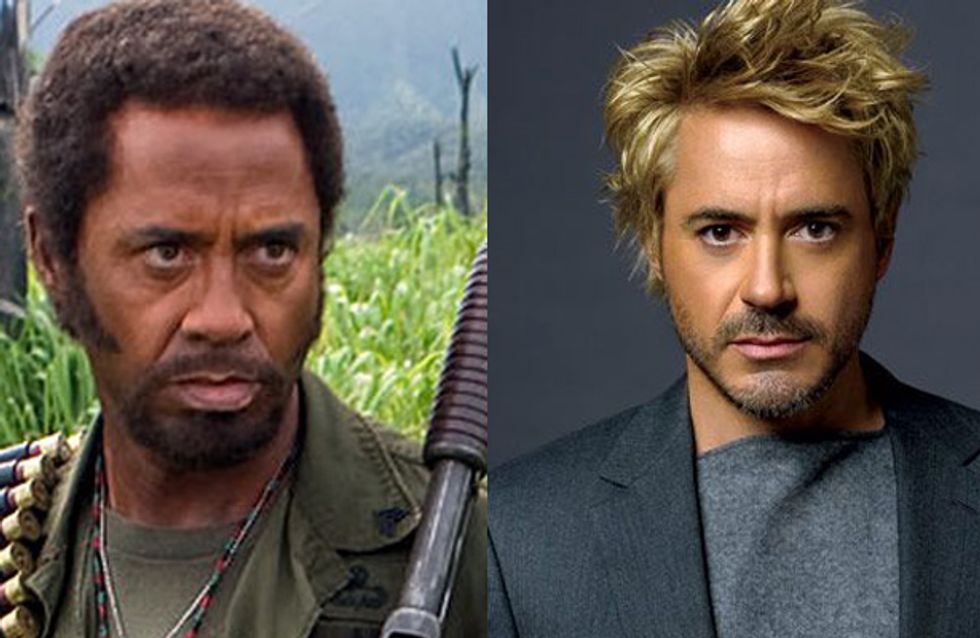 It's fair to say that actors are a dedicated bunch. Most Oscar winners have gone above and beyond for their winning part; starving themselves or piling on the weight, trying out different careers, giving up everything they own, the list goes on! It's fair to say that changing your gender, appearance and even race for a part is extreme, and after seeing the lengths these actors went to for their parts we have to wonder: are they all just a little bit crazy?!

Robert Downey Jr went all out in Tropic Thunder, turning himself into black character Sergeant Lincoln Osiris. It was pretty risky, but the man ended up nominated for an Oscar! Oh Robert DJ, is there nothing you can’t do?

Jude cross-dressed for his role in Rage. Is it just us, or does he look oddly hot?!

Production on Cast Away was paused for a year so Tom could lose 55 lbs and grow his beard and hair to unruly lengths. He also ended up spent weeks up to his neck in water for filming. Whatta man!

This one is sheer madness. The usually buff Matthew survived on nothing but Diet Coke, egg whites and a piece of chicken a day for his role in Dallas Buyers Club. He lost more than three stone and a quarter of his body mass, and unsurprisingly, it was awful.

He said: “I was always hungry and irritable. My body resembled a little baby bird with its mouth open, crying ‘feed me, feed me!’ and you realise momma bird ain’t going to feed you. It’s hard.’”

Dustin Hoffman's cross-dressing for his role in Tootsie ended up having a profound effect on his life.

In an interview about the part, the actor welled up speaking about how he has been brainwashed in his perception of women. It's pretty incredible!

Jared gained almost 70 pounds for Chapter 27, eating nothing but unhealthy snacks like melted ice cream mixed with soy sauce and olive oil (BLERGH). However, this was so insane that it caused him serious health issues and landed him in a wheelchair.

He said: “I couldn’t walk for long distances; I had a wheelchair because it was so painful. My body was in shock from the amount of weight I gained.”

Shaving your head for a role? Argh, commitment! Demi Moore was dedicated for G.I. Jane, though unfortunately for all her efforts she only ended up with a Golden Raspberry award for Worst Actress – oops!

Renee gained 20 lbs and went from a size 4 to 14 to play the iconic Bridget Jones.

For The Machinist, Christian Bale became painfully thin. Painfully. It turns out he lost 63 lbs for the role (though thankfully he piled it all back again when he bulked up for Batman Begins, phew!).

Rooney got her lip, nose and eyebrow pierced for The Girl with the Dragon Tattoo. Oh, and her nipple. HER NIPPLE.

She said: “I’m naked quite a lot in the movie, and I thought, she has it in the book, and she should have it [in the movie]…it just felt like a good [piercing] to get – a necessary one to get.”

Yeah...the character also has a DRAGON TATTOO but you didn't get that done, did you Rooney? *Eye roll*

For Monster, Charlize Theron gained 30 lbs, wore prosthetic teeth and changed her posture to look tough. In the end she looked startling unrecognisable. No wonder she won an Oscar for the role!

The already super slender Natalie went on a carrots and almond diet (we're pretty sure that means she only ate carrots and almonds) and worked out every day for hours to get her in the skinny shape needed to play the mentally disturbed ballet dancer Nina Sayers.

She told EW: “There was some nights that I thought I was literally going to die. It was the first time I understood how you could get so wrapped up in a role that it could sort of take you down.”

The man got a hack cab license and ferried people about New York for a full 12-hour shift. We wonder if anyone recognised him?!

Daniel had a year to prep for his role as Abraham Lincoln. The actor went through photos, biographies and novels to get through the role, and went method with Abraham Lincoln’s voice, using it even after filming had finished. After. filming. had. finished.

Jake lost 20lbs for his role in Nightcrawler. In comparison to these other crazy dieting actors 20lbs might not seem like a lot, but Jake was pretty skinny anyway, so his new gaunt appearance was particularly shocking, especially when he is such a babe usually!

Hilary Swank played the role of transgendered teen Brandon in Boys Don’t Cry, and to get into the role she spent weeks living as a male, reading novels on transgender people and strapped down her chest.
​
So when does dedication become craziness? Just wondering?

John sparkled in his first musical role since Grease, though this time rather than playing a handsome, smooth high school student, he played the dramatic but loveable Edna!

All Cameron Diaz had to do was stick on a frizzy wig for Being John Malkovich and she was totally unrecognisable.

Apparently it was a challenge to make her look 'homely' and we don't doubt it!

20. The cast of Saving Private Ryan

To prepare for the highly realistic war film, several of the film stars including Edward Burns, Barry Pepper, Vin Diesel, Adam Goldberg, Giovanni Ribisi and Tom Hanks underwent a radical boot camp which Burns described as: “The worst experience of my life.”

Adrien Brody went loco in preparation for his role in The Pianist. He played a Jewish man in WWII, and so to understand what his character went through, Adrien stripped his life down to basics, getting rid of his apartment, his car and his phone. He even ended up breaking up with his girlfriend. Oh, and he lost 30lbs for the role.

He perked up when he won an Oscar for the role though.

So, what do you think? Are these people crazy, or dedicated? Tweet us @sofeminineUK!