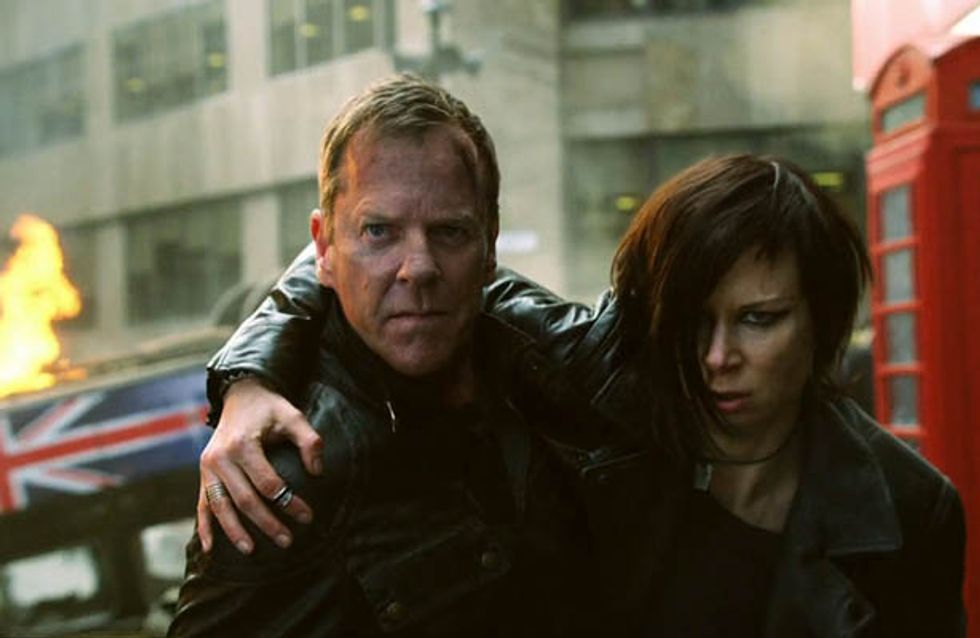 Ladies and gentlemen, 24 is coming back onto our screen. We can’t believe our good fortune that Jack is back, and Fox revealed the first trailer for the new series 24: Live Another Day at the Super Bowl on Sunday. We have gone into full nostalgia mode for the groundbreaking and generally awesome show that ran for eight seasons, and have come up with the juiciest things you never knew…

This is when terrorists on Day Four and Day Six attacked the bus, shopping mall and hotel. Mornings are admittedly a stressful time of the day.

2. Kiefer Sutherland had to spend an average of 15 hours a day, six days a week on set

Still, he got $40 million for it. We wouldn’t complain.

3. The Office’s Stephan Merchant makes a cameo as a CTU worker in Day Six.

Ricky Gervais also filmed a cameo as a presidential aide, but it was eventually cute. Gutted Ricky!

We’re in the wrong job.

5. All cast members were required to have their hair and/or beard trimmed every 5 days

Continuity has a price guys.

6. Kiefer Sutherland had a real tattoo put on his arm when Jack Bauer had to get a tattoo

Apparently having the tattoo done in make up every day was too much effort, so he just got it for real. We’re impressed by his sheer laziness…

7. Actor Michael Masse who plays Ira Gaines was a real life villain when he accidentally shot Brandon Lee on set for The Crow

It wasn’t his fault, but Michael did fire the gun that hadn’t been properly prepared for the scene. Shudder.

8. What did Jack whisper to Nina?

In the script and during rehearsal Jack whispered "I will hunt you down every day for the rest of your life." To genuinely surprise actress Kate Warner, at the last minute Kiefer whispered "Sarah, I love you. I wish you hadn't married Xander - so we could be together." Awesome.

9. The original idea for 24 was for it to be a romcom showing 24 hours in the life of a wedding

We're guessing a 24 wedding would have gone something like this…

12. All in all Jack’s daughter Kim has been abducted eight times

Seriously Kim, learn self-defense. Or move to Australia and change your name. Or something.

13. Sherry is the only character who wore six different costumes in the first season

Well, she is a First Lady. It seems only right that she was allowed some serious costume changes, even though everyone else wears only one or two outfits for the entire first season!

14. Sarah Clarke (Nina) was cast on the morning of filming, so had to spend the entire first series in her audition clothes

Good thing she didn't turn up in a poncho!

There was a lot of torture...

16. Jack Bauer has come back from the dead multiple times

Classics include when he came round after being tortured, burned and tasered to death, and when he was shot to death then came round when injected with epinephrine. Jack Bauer’s invincible.

17. A 12-hour digital clock rather than 24-hour numerals were used as it was feared this would confused American viewers

We’re not sure how…

19. There is an Indian adaptation of the show

It premiered in October 2013 with Anil Kapoor as the Jack Bauer character, who was renamed Jai Singh Rathod.

College students downed a shot every time Jack said “damn it”. When Kiefer Sutherland heard, he changed the script to say “damn it” fourteen times in one hour. Amazing.

21. The series has received 68 Emmy nominations

Award judges really, really like it. It ended up winning 20 of its nominations.

22. There was supposed to be a film

It was just too much for the writers to handle though, and Kiefer Sutherland explained: “It’s impossible to ask writers to work on the show and then come up with an amazing film we can shoot in the break between seasons.” Fair enough.

23. The producer initially rejected the idea

Executive producer Joel Surnow had the idea and told producer Robert Cochran about it over the phone, whose response was: “Forget it, that’s the worst idea I’ve ever heard, it will never work and it’s too hard.”

24. The new season will take place in London

Jumping ahead four years in time, Jack Bauer finds himself on the run in London with help from Chloe O’Brian. We cannot wait! Check out the trailer!

Are you excited that the series is coming back? Tweet us @sofeminineUK