8 Moments We Fell In Love With Lupita Nyong'o

From the moment 12 Years A Slave star Lupita Nyong'o burst onto the scene in her Academy Awarding-winning role, we haven't been able to take our eyes off of her. From her bold red carpet style, to her fun and infectious personality, it seems we, along with the rest of the world, can't get enough of her. We're just gonna say it, we're crushing hard.

You may have been hiding under a rock for the past several months if you missed Lupita Nyong'o's rapid ascent to stardom. A quick look at her, and it's hard not to see what all the fuss is about. She's got style, class, manners, grace, an incredible wardrobe, flawless skin, a gorgeous smile, tons of talent... (we could go on).

But just in case you needed any more reasons to obsess over the Mexico-born, Kenyan-raised star, we've compiled a list of seven perfect Lupita moments when we fell for her, hard.

Stealing the scene at the 71st Annual Golden Globes

When Lupita hit the red carpet at the 71st Golden Globes in a caped red Ralph Lauren dress, all eyes were on her. Perfection? We think yes.

While being probed by Ellen on her possible relationship with the hunky Jared Leto, she quipped, "But I thought Miley Cyrus broke us up? That's the last thing I heard." Ooh, good dodge!

It's always awesome to see celebs getting starstruck. When Lupita met Kerry Washington, she revealed she's a faithful #Gladiator (hashtag and all!). We're also huge fans of Scandal, so we pretty much freaked out.

When she attended the Essence 7th Annual Women in Hollywood Luncheon and revealed she, too, suffered with insecurities growing up. See - she's just like us!

When Lupita received her Oscar for Best Supporting Actress for her role in 12 Years A Slave, she gave one of the most moving and heartfelt speeches. Her words are so powerful and well-chosen that we're slightly (AKA massively) in awe of her.

"Thank you to the Academy for this incredible recognition. It doesn't escape me for one moment that so much joy in my life is thanks to so much pain in someone else's. And so I want to salute the spirit of Patsey for her guidance. And for Solomon, thank you for telling her story and your own.

Steve McQueen, you charge everything you fashion with a breath of your own spirit. Thank you so much for putting me in this position. This has been the joy of my life. I'm certain that the dead are standing about you and watching and they are grateful and so am I.

When I look down at this golden statue, may it remind me and every little child that no matter where you're from your dreams are valid. Thank you."

Being real with Glamour magazine

When she told Glamour magazine, "I've worked hard to feel beautiful in my natural skin. Personally, I don't ever want to depend on makeup to feel beautiful." She's clearly a woman after our own hearts.

Allowing her brother to crash the celebrity Oscar selfie

She made it a family affair when she brought her brother as her date to the Oscars. He then managed to crash the now infamous and record-breaking celebrity selfie. She deserves an award for best sister of all time. Seriously.

Showing us her dance moves with Pharrell

Lupita secured a place in our hearts forever when she hopped out of her seat at the Academy Awards and danced along to "Happy" with Pharrell. She looked absolutely flawless!

Then there's her outfits. We fell in love with ALL of these: 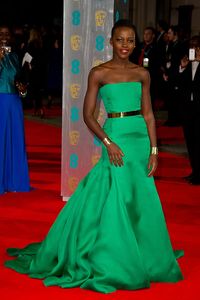 In love with Lupita Nyong'o? Crushing hard on her wardrobe? Lusting after her glowy skin? There's too many reasons to love this woman! Tweet us yours @sofeminineUK