Abbey Clancy is set to battle it out for the Mirrorball trophy this Saturday on Strictly Come Dancing. The mother-of-one is up against presenter Susanna Reid, actress Natalie Gumede and singer Sophie Ellis-Bextor in the first all-female celebrity final for the dance show. But it looks like the constant and intense rehearsals are taking a toll on the model’s body, as Abbey admits that she’s struggling to cope with the demands of the competition.

Abbey Clancy is delighted to have made it to the final of Strictly Come Dancing 2014.

Competitive Abbey and her partner Aljaz Skorjanec have thrown themselves into rehearsals for the show, and it’s certainly paid off as lately the Strictly pair have been consistently impressing the judges week after week.

But just a few days after coming joint top of the leader board, Abbey has revealed that she’s struggling to cope with the “draining” rehearsal regime.

Speaking to the MailOnline, Abbey admitted: “My body’s failing on me.”

“I do feel like that now I know the end is in sight, my body's failing on me. I've got to find that last bit of stamina and channel it into this dance.” 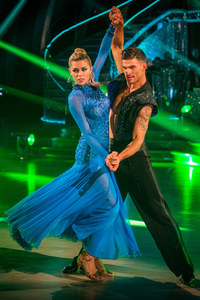 According to reports, Abbey and Aljaz are planning their showdance – where couples can choreograph any moves they wish rather than be tied to a particular style – to Guns N’Roses classic rock hit Sweet Child O’Mine.

It sounds like it’s going to be a pretty complex routine, which the dancing duo are hoping will just edge them ahead of the competition.

But it’s clearly not been easy for Abbey to pick up the steps, as she reveals: “We spent about two hours on this one lift. I couldn't stay straight, I kept breaking in the middle, not using my core enough and Aljaz hurt his wrist.

“Everything is really sharp moves and it's draining on your body. After three months of hours and hours of rehearsing, I'm finding it tough.

"The routine's epic, the song's epic. I've got to find that last little bit of strength. I'm excited, I want to do myself proud.”

At the moment the competition is too close to call, with all four female celebrities regularly wowing audiences with their impressive moves.

But while Abbey didn’t start the show strong, last weekend the model achieved 39 out of 40 to tie with series frontrunner Natalie at the top of the leader board.

It just goes to show how brilliant this year’s competitors are though as despite this Abbey was in the bottom two, but she survived the dance-off against Casualty star Patrick Robinson.

Abbey added: “I've got to work hard and get this showdance perfect. This is the difference between winning or losing.”

Will you be watching the Strictly Come Dancing final this Saturday, December 21 at 6.40pm on BBC One? Tweet us @sofeminineUK!