by Emmy Griffiths Published on 14 January 2016 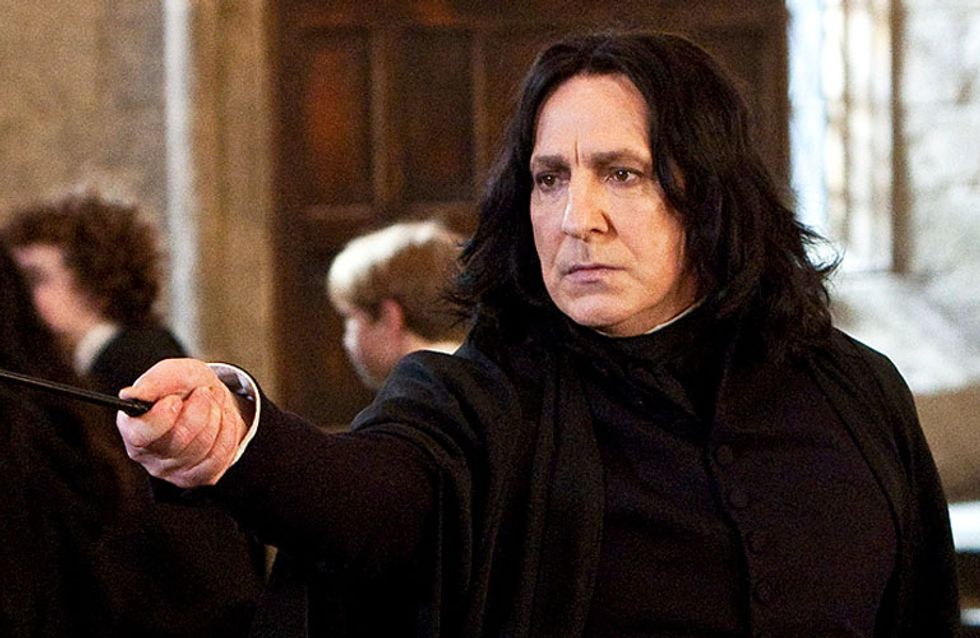 The British icon Alan Rickman has died aged 69. His death was confirmed today by his family after suffering from cancer. As one of the most beloved and legendary British actors, Alan's roles ranged from dastardly Sheriffs to romantic heroes to greasy potion masters, and we loved him for it. Below we take a look at our favourite movie moments in tribute to the man with THAT incredible voice.

As the enraged, slimy Sheriff of Nottingham, Alan made this film the brilliant, hilarious classic that it is. Forget the American accents and Marion's dodgy hair, Alan's portrayal as the furious, black-clad sleazeball is what had us cracking out this DVD every Christmas and Easter.

Hans. Freaking. Gruber. Rickman's very first film role was as the German mastermind Hans Gruber. What's really crazy about this is that it was his first role ever. Before Die Hard, he'd been in plenty of plays and BBC dramas, but a blockbuster like this was an unprecedented break into show business. He played Gruber with an intensity that is needed to play the leader of a bunch of terrorists, showing he had a knack for playing the villain - a talent that would serve him well for years to come.

As the ultimate antihero, Snape was a petty, mean-spirited man. But who wouldn't be if you were morally forced to protect the son of the man you detested and took your one true love from you? Snape's love for Lily Potter is what made him human, something we all knew by the seventh book, and Alan's towering, bat-like, angry interpretation of the character was just PERFECTION, especially when you discover the truth and Snape's vulnerability is revealed. To fans, there could be no other Snape than Alan Rickman.

As Emma Thompson's foolish husband beguiled by the attractive and flirtatious woman in the office, Alan played the disgraced husband of a wife devastated by his actions, and it was probably a tribute to how we feel about him as an actor that even though he is sort of the villain of the piece, we all rooted for him and were happy to see he and his wife were still together at the end.

As Colonel Brandon to Kate Winslet's Marianne, Alan's turn as the classic Jane Austen hero was just amazing. Alan Rickman galloping madly to save the day, Alan Rickman mesmerised by Marianne playing piano, Alan Rickman simply rocking a high waisted pair of breeches...let's face it. This is the film that made us all fall in love with him.

As the washed up Shakespearian actor driven to appearing at conventions for a popular sci-fi show he appeared in decades ago, Rickman's role as the nihilistic Alexander Dane/Dr. Lazarus of Tev'Meck seemed hilariously accurate, and also brought the feels home when he finally embraced his character's despised catchphrase: "By Grabthar's hammer, by the suns of Warvan, you shall be avenged!"

What is your favourite Alan Rickman film? Tweet us @sofeminineUK.