Miley dons another new look, this time for her upcoming Bangerz tour. The singer channeled her inner “Party in the USA” rockstar and donned a patriotic leotard for dress rehearsals. Fans can look forward to all kinds of wardrobe shocks in coming weeks, since Miley brought on five different designers to make costumes for the tour. We can’t wait to see all the jaw-dropping duds!

Though her Bangerz tour technically doesn’t start until Friday in Vancouver, Miley Cyrus has given us all a sneak peek of what’s to come!

Miley posted an image on Instagram Monday of her rehearsing and getting down in a patriotic-themed leotard and red and white boots. The singer was rocking her newly chin-length platinum hairdo, while surrounded by backup dancers similarly clad in red, white and blue.

Miley’s Bangerz tour, which makes 38 stops in the states before jumping over to Europe, will boast five different costume designers. Jeremy Scott, Kenzo, The Blonds and Roberto Cavalli all contributed pieces to the tour, so Miley’s wardrobe is guaranteed to excite!

The singer has insured that her new tour will be exciting for both her and her fans. “I’ve made so many extra costumes and extra set lists so I don’t have to do the same thing every day,” Miley told E! News in January. “Otherwise I’m going to hate touring.” 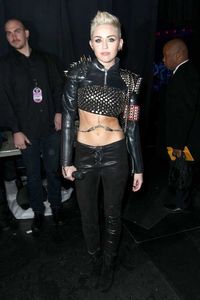 Miley’s tour kicks off on Valentine’s Day, and the singer says that certainly was no mistake. “I did that on purpose,” she says. “Valentine’s Day is usually one of the most depressing days of the year. I’m going to make it a really good one this year.”

Valentine’s Day promises to be fun for Miley and for all her fans in the audience. We can’t wait to see all the crazy designs and performances from Bangerz!

What do you think of Miley’s new leotard? Have any crazy Bangerz wardrobe predictions? Tweet us @sofeminineUK.