You'd think Benedict Cumberbatch was one of the most eligible bachelors around at the moment. Voted as Empire's sexiest male actor, the title character in the massively popular Sherlock series, and landing roles in some of the biggest blockbusters of the year, including The Hobbit and Star Trek: Into Darkness, he is at the top of his game! Also, just look at those cheekbones! However, the actor revealed that his fame has made it difficult to find love - well he hasn't met us yet...

Benedict Cumberbatch has revealed that his fame has made it difficult to find love.

Although he would definitely have girls queuing up to share a Nandos with him, the 37-year-old actor has said that it's difficult to find a girlfriend as the ladies tend to think he's either too posh, or too much like Sherlock Holmes.

Is Benedict a method actor then? Has he brought Sherlock Holmes into his love life? We shudder to think! 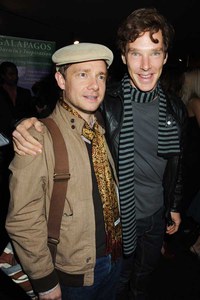 The Sherlock star told GQ magazine: "It is harder [meeting women], because people think they know more about you than they actually do."

We can't believe that the ladies wouldn't want to be with Benedict, but then he is single at the moment, so when you eliminate the impossible whatever remains however improbable must be true.

The British heartthrob also talked about how he has inevitably been expected to play darker roles due to his portrayal of the modern-day sleuth detective, but it is something he is more than happy to be linked with, especially as he has had parts that are completely different to the role and has avoided being pigeon-holed so far.

He said: "I know that everything I do now will have flavours of Sherlock. Everyone wants those dark, complicated anti-heros and, of course, I play them."

"But I also play Charles in August: Osage Country, an everyman; he's not super-sleuthing or cracking code or breaking algorithms. I play Ford in 12 Years A Slave and Alexander in Stuart: A Life Backwards – he's a pretty open book; smart man though he is, the complexity is all about Stuart. I mix it up."

Benedict also talked about how he is keen to try comedy, saying: "I love my comedy and when the right project comes up I won't shy away from it. There's a lot of humour in what I do, specifically Sherlock, but it would be great to play a normal guy in a normal comedy."

Would you find Benedict too posh to date? Tweet us @Sofeminineuk