Beyoncé Knowles only knows one way - the diva way. Like most of us, when you achieve a weight loss triumph all you want to do is show the world what you’ve got so when Bey lost 65lbs of post-baby weight she was more than eager to show it off...in a series of sexy, stripper style videos. That's how diva's do.

In a documentary for her new album Beyoncé, the 32-year-old, revealed that the inspiration behind stripping down for her latest launch came from losing 65lbs after giving birth to her daughter, Blue Ivy.

The songstress reveals she was keen to flaunt her curves in a sexy new video to show women that you “can get your body back” after having a child.

“I was very aware of the fact that I was showing my body.

It took blood, sweat and tears for Bey to shed the weight, but with “hard work” and a bit of confidence losing the baby-weight is more than possible. And she wants all the women in the world to know that you CAN still ignite that inner spark you once had too!

The most provocative video Bey dances in is “Partition”, which shows the Bootylicious star dancing in a strip club.

“I know that there's so many women that feel the same thing after they give birth. You can have your child and you can still have fun and still be sexy and still have dreams and still live for yourself,” she said.

She added: “I don't have any shame about being sexual. I'm not embarrassed about it, and I don't feel like I have to protect that side of me because I do believe that sexuality is a power we all have.”

Take a peek at Bey in action!

Queen Bey also defended the story behind “Partition” and why she chose to film it at the Crazy Horse nightclub in Paris - where they went after Jay proposed to her on his birthday.

“The day that I got engaged was my husband's birthday, and I took him to Crazy Horse and I remember thinking "Damn, these girls are fly.

“I just thought it was the ultimate sexy show. I was like, ‘I wish I was up there, I wish I could perform that for my man.’ So that's what I did for the video.”

It takes a lot of courage to rock it half-naked, but it's working - we’re loving this new “grown-up” Beyoncé!

​The “Mrs Carter World Tour” was among the year’s highest grossing tours and the release of her self-titled album has seen a huge success ranking number one in the US for the last three weeks.

It's safe to say Beyoncé's done well for 2013 so we can't even begin to imagine what 2014 will bring her! One thing is for sure though, Beyoncé is one hot mamma!

Are you taking inspiration from her new racy videos? Tweet us @sofeminineUK 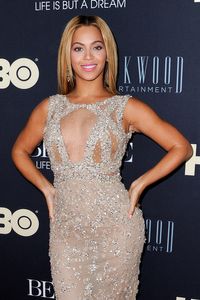