Since Bradley Cooper is the sexiest man ever, fabulously successful and a great actor to boot, it’s hardly surprising that he’s found a loving girlfriend, and apparently his girlfriend Suki Waterhouse is definitely ‘the one.’ We know. Don’t cry, he’s too happy to see your tears. Curse him. Only joking, we’re happy for him! We suppose…

It looks like Bradley Cooper is a taken man for the foreseeable future. We know, but he can’t marry all of us! Sigh.

It sounds like The Silver Linings Playbook actor is utterly smitten with his girlfriend, and was particularly loved-up at the post-awards dinner following the Baftas on Sunday. According to The Sun, the 39-year-old actor barely left his girlfriends side for the entire evening. 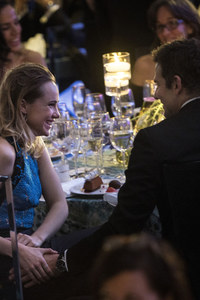 The pair, who have been celebrating their one-year anniversary this week, kissed and laughed as they ate before heading to an afterparty at the Rosewood hotel along with Michael Fassbender, Cate Blanchett and Uma Thurman.

It looks like the couple ducked out early though, as Suki was on the catwalk for Burberry as part of London’s Fashion Week the next morning. Bradley was on the front row, being every inch the supportive boyfriend. We’d say we weren’t jealous, but we’d be LYING.

Bradley told the Sun: “[Suki’s] wonderful, the one for me. It feels great. I’m having a great night, I feel very honoured.”

Ah, what a gentleman. It looks like their relationship is definitely going the distance, particularly as Suki has earned the approval of Bradley’s mum, Gloria. A source revealed: “Gloria’s been really won over by Suki. She’s backing Bradley all the way if he wants to tie the knot with her.

“She thinks Suki is great for him and, although initially a little concerned about the 17-year age gap, that vanished as soon as she saw them together.”

Adorable. Particularly since Gloria has been living with her son since 2011!

Bradley seems to be on top the world at the moment, particularly as he made a visit to the White House recently, albeit without his underwear. Sorry, we think we just swooned.

Speaking to Ellen DeGeneres, the Hangover star revealed: “I’m getting dressed like 10 minutes before I was supposed to go, and literally the pants go up to like here [motioning to his thigh].”

“I just started laughing, actually this is hilarious – I’m going to meet the president. I had to go commando, No. 1 because there was no room at all. It was a nightmare, but I made it through.” What a trooper!

Do you think Bradley Cooper will be popping the question to Suki Waterhouse soon? Tweet us @sofeminineUK