Speculation that Bruce and Kris Jenner had split reached fever pitch over the summer. But now it’s finally been confirmed, as the Kardashian matriarch has announced the sad news that she has indeed been living apart from her second husband for a year. Few other details are known, because reportedly the Jenner divorce will be a major plot line in the upcoming series 9 of Keeping Up With The Kardashians.

After enduring months of rumours about the state of her marriage, Kris Jenner has finally had enough and confirmed what we all suspected, that she and Bruce Jenner are separating.

Not only that but the matriarch and patriarch of reality TV have been living apart from each other for a whole year.

Kris opened up to E! News and explained: “We are living separately and we are much happier this way.”

TMZ report that the show will go on despite the split, and the pair will continue to feature in their lucrative family reality TV show Keeping Up With The Kardashians.

Sources have revealed that the separation will be a major plot line of the latest 9th season, and the drama will certainly make for good TV.

Bruce seems to have had enough time to get to terms with things, as immediately after the announcement of the split he looked right as rain as he rushed off to shoot scenes with their daughters Kendall, 17, and Kylie, 16.

While at the weekend it was alleged the 63-year-old was flirting with a whole host of women in the Lamborghini tent at the Virginia International Raceway.

The former athlete was overheard saying: "I'm finally free to do what I want and live life the way I want."

There’s no actual divorce on the cards as of yet for the couple who have been married for 22 years, reportedly due to the fact that there’s no pre-nuptial agreement in place, which is going to make the splitting of assets very tricky.

There's also been no comment from Bruce and Kris’ brood of kids - no doubt they’re saving it all for when the cameras are rolling.

What do you think? Should Kris and Bruce let their split be filmed for reality TV? Tweet us @SofeminineUK! 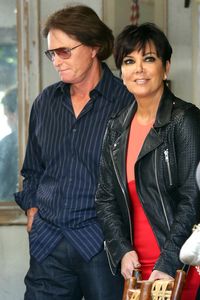 by the editorial team
+
All the news about Kris Jenner