One of the most looked-forward to aspects of Super Bowl Sunday is the halftime performance. In the past we've seen greats like Michael Jackson, Madonna, U2, and Beyonce take the stage. This year, we were excited to see a classic American rock band, The Red Hot Chili Peppers, team up with one of the newer kids on the block, Bruno Mars. The combined forces made musical magic. Take a look!

Bruno Mars has such an unbelievable range of talent that it's hard to believe the superstar is only 28 years old. Last night he brought his singing chops and smooth moves to the Super Bowl halftime show.

His performance featured 60's Motown, 70's disco, 80's pop and a touch of modern hip-hop. His old-school charm and signature style dazzled us all. That gold glitter suit jacket is everything.

And perhaps best of all, his performance also featured a cameo by The Red Hot Chili Peppers - hailed by many as The Rolling Stones of this generation. "Give It Away" never looked so good! And whoa - Anthony Kiedes can still rock a shirtless bod. Yum. 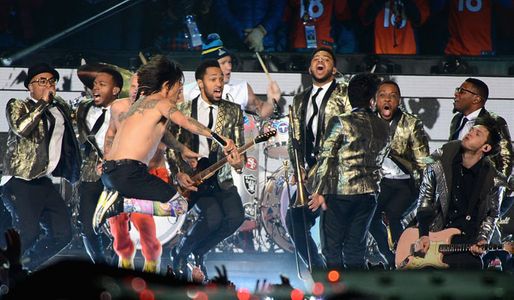 Bruno opened up with his showstopping hit "Locked Out Of Heaven." At 28, he's the youngest star to take the Super Bowl halftime stage in 13 years. Wow!

The most heartwarming part of the performance was the cameos from American troops shouting out to loved ones from overseas before Bruno closed with an old favorite, "Just The Way You Are."

While we do love the flashy performance from years back, it was nice to see true talent that didn't require a ton of hijinks. Bruno sung his heart out and reminded us all what being an American is about.

What did you think of the halftime show? Tweet us @sofeminineUK!

by the editorial team
+
All the news about Bruno Mars