by the editorial team Published on 9 January 2014 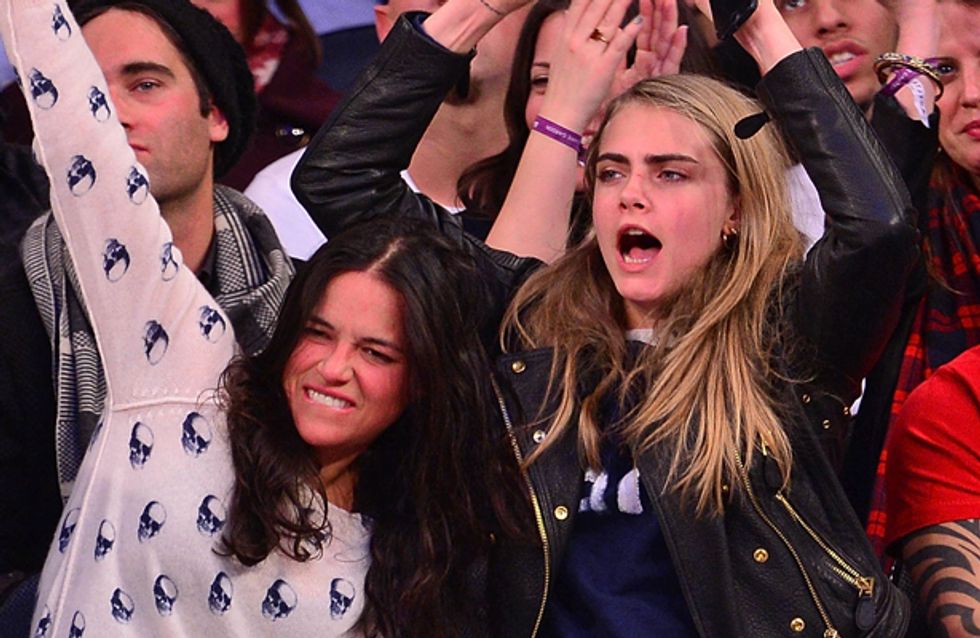 Cara Delevingine and Michelle Rodriguez certainly weren’t afraid of a little PDA while cheerin on the New York Knicks at the home game on Tuesday. The ladies were spotted courtside cuddling up and smooching. They also seemed pretty tipsy. Are these friends getting a little too friendly?

But they seemed more interested in one another than the game! The pair was seen kissing, laughing, and being extremely friendly with one another. They also appeared to have enjoyed several cocktails beforehand. (Maybe one too many!)

Yes, they’re dating! Michelle Rodriguez opens up about relationship with model Cara Delevingne
What we’ve long suspected has finally been confirmed: 35-year-old actress Michelle Rodriguez and 21-year-old model Cara Delevingne are dating! According to Michelle, the relationship is smooth sailing so far and they look forward to having even more fun together. The pair reportedly have the support of both their families, and it looks like the lady loves couldn’t be happier.

The ladies posed for selfies, smoked e-cigarettes and had an absolute blast at the game. Afterward, Cara and Michelle were stopped by paparazzi, when they decided to take a cue from the New York City Rockettes by doing a few high kicks of their own!

Michelle was not the only celebrity Cara snuggled up to at the game. The model posted a picture to Instagram of her and Kellan Lutz sticking their tongues out at the camera. She captioned the photo with, “Get out the licks for the Knicks.” We see what you did there, Cara!

Cara has been seen with lots of Hollywood's hottest recently. She and sexy singer Rihanna sported the hottest fashions as they partied in the New Year together.

With friends like those, Cara is one model to look out for. What do you think of her and Michelle’s display of PDA? Tweet us @sofeminineUK.