Cheapest Guy On The Planet Returns Condoms After Date Bails 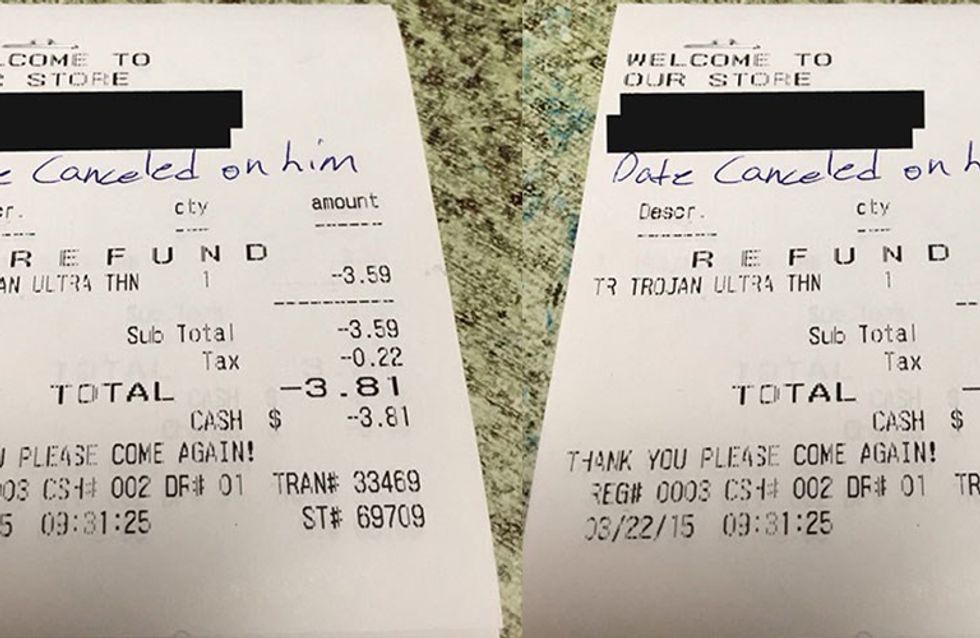 Any girl who enjoys a good shopping spree knows that it is of life-or-death importance to keep receipts from your most recent purchases. Who knows if you're going to wake up in a few weeks and realise that tangerine coloured poncho was actually a horrendous idea? Well, it turns out guys can be just as scrupulous when it comes to their favourite items to purchase: condoms. Let's now discuss the cheapest, receipt-hoarding man on the planet.

I know plenty of guys that don't carry condoms around when they go out on a date, especially a first date. They allege that being so presumptuous about getting lucky is going to jinx their odds, and consequently the sex gods will damn them to six months of celibacy hell. I'm a big believer that men should always go with the "better safe than sorry" approach, but then again I'm not that superstitious.

Enter mystery Reddit user who we will call "Bart," because this seems like something a guy named Bart would do. Well, Bart had a big date, and evidently he had no qualms about jinxing his odds of getting lucky on said date because he went to his local drug store like a grown adult and purchased a box of Trojan Ultra Thin condoms for $3.81. First of all, can we take a brief second to acknowledge how unbelievably cheap that is to prevent STDs and pregnancy? THAT is what they should be posting on the safe sex campaigns on the underground: "Wear condoms: they're so cheap you would literally be a penny counting asshole not to."

I digress. Poor Bart ended up getting stood up by his heartless date, and in his heartbreak he decided to go to the drug store, return the condoms, and like any good millennial, post the receipt - memo included - on the Internet. For your viewing pleasure:

A few things. We have to give Bart credit for wanting to practice safe sex and being savvy enough to keep the receipt. Honestly, who knew you could actually return condoms? I've never met a guy that diligent, do you think he could file my taxes for me?

​Also, the 9:31AM time stamp on the receipt is classic. Bart wasted NO time hopping out of his freshly cleaned sheets to get his refund. This guy has Black Friday shopping partner written all over him. I hope that Bart still believes in safe sex and doesn't let this experience make him so superstitious he goes on his next date sans protection. To the lady that let this cheap, yet responsible dime piece go, we hope that skipping your date to watch Keeping Up with the Kardashians was worth it.

Do you think Bart was being cheap? Tweet at us @sofeminineUK!