Cheryl Cole has put down the microphone and pulled up a bar stool in the Rovers Return to film an extra special episode of Coronation Street. The glamorous popstar is making her appearance on one of Britain’s best-loved and long running soaps as part of ITV’s charity fundraiser Text Santa. Doesn’t the former X Factor judge look right at home pulling pints with Michelle Keegan?

Cheryl Cole is entering the soap world, but it’s only going to be a one-off as the Geordie popstar is making a special appearance on Corrie as part of Text Santa.

Behind the scenes images show the 30-year-old hanging out behind the bar with one of the soaps most popular stars Michelle Keegan, who plays barmaid Tina McIntyre.

She’s also seen in one of the snaps attempting to navigate that famous cobbled street in a pair of brown suede over-the-knee boots, as she gets out of a shiny red Mini Cooper that’s parked outside.

Soap sources have revealed that Coronation Street scriptwriters have written Chezza into the show as Tina’s childhood friend, who arrives in Weatherfield and heads straight to the Rovers Return to see her old pal.

The pair are supposed to travel home to Newcastle for a Christmas party put on by Cheryl’s mum, but of course something happens to throw their plans into chaos. 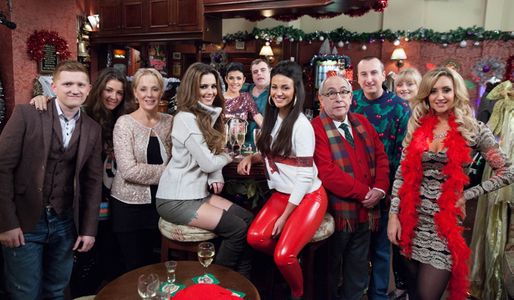 Additionally The Pogues singer Shane McGowan is also supposed to make an appearance in the special episode set to air on the 20th December, but it’s not know what his guest appearance will entail.

ITV bosses are hoping that Cheryl’s high profile cameo in Corrie will help to raise lots of money for their charity fundraiser Text Santa that supports six UK-based charities.

This year Text Santa is supporting Age UK, Barnardo’s, BeatBullying, British Heart Foundation, CLIC Sargent and Help the Hospices, which all offer life changing services to communities across the country.

Text Santa is part of ITV's Corporate Responsibility programme, and the organisation does not make any profit from the appeal, with 100 per cent of donations made by viewers going directly to the charities Text Santa supports.

Are you looking forward to seeing Cheryl in Corrie? Tweet us @sofeminineuk!