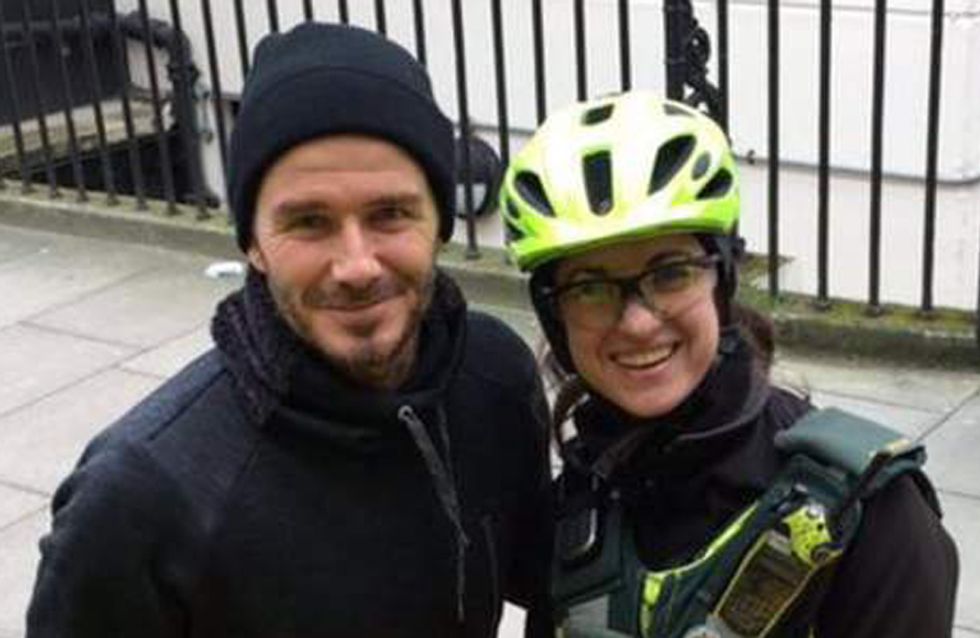 If you needed any more proof that David Beckham was a football-playing, H&M boxer-wearing, tattooed angel, look no further. The ex-footballer and all around nice guy paid a small kindness to a paramedic and her patient the other day by fetching them coffee and tea as they waited in the cold. What. A. Babe.

A paramedic was helping a pensioner who had fallen in Central London when none other but David Beckham walked past the scene and decided to help in whatever small way he could. The paramedic, Catherine Maynard, said: "I was waiting with my patient … to transfer him to hospital, and although I was keeping him warm it was very cold outside."

"All of a sudden, I looked up and saw someone who looked like David Beckham walking past us. He said hello and got in his car. I said to the man I was treating, 'I think that was David Beckham.’ Ten minutes later, he came back with a cup of coffee for me and a tea for the patient. "We were both very amused, and flattered. It was awful cycling around in the cold today and I couldn't believe it when he came back with some hot drinks."

Although it IS just a small kind gesture, not everyone would go out of their way to help out. Nice one Becks!

Inspired by Beck's act of kindness? https://t.co/jZ1ztn6e4V offer our crews a coffee and tweet us a pic #buyitlikebeckham

The London Ambulance Service was delighted that he wanted to help. They said that Beckham shows he: "respects the service's hard-working paramedics and even a gesture as small as buying a cup of coffee makes our crews feel appreciated."

We know people everywhere do these small acts of kindness every day, but it just goes to show just how appreciated they go! What do you think? Tweet us @sofeminineUK!