Former Disney actress turned X Factor USA judge Demi Lovato has had a rollercoaster of a life and she’s still only 21-years-old. Back in 2010 the singer/actress checked herself into rehab, but it’s only now that she’s coming clean about her cocaine addiction being so strong she “couldn’t go 30 minutes” without having a hit. Thankfully the star came out the other side and is now clean and sober!

Demi Lovato is not holding back in her latest interview, going into shocking detail about the drug and alcohol abuse that forced her to seek professional help.

The former Disney actress admits that she used to carry cocaine with her everywhere, even sneaking it onto planes as she toured the world.

Although her wake-up call was when she was on the way to the airport at 9am, throwing up and clutching a Sprite bottle filled with just vodka.

The American X Factor judge candidly told Access Hollywood: “Something I've never talked about before - but with my drug use I could hide it to where I would sneak drugs.

"I couldn't go 30 minutes to an hour without cocaine and I would bring it on aeroplanes.

"I would smuggle it basically and just wait until everyone in first class would go to sleep and I would do it right there. I'd sneak into the bathroom and I'd do it.

"That's how difficult it got and that was even with somebody [with me], I had a sober companion, somebody who was watching me 24/7 and living with me [and] was able to hide it from them as well." 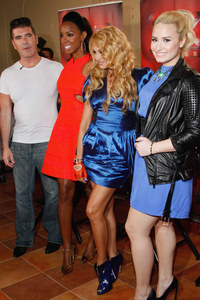 The 21-year-old’s acting skills meant that no one around her really saw how bad things had got, until her outburst which saw her punch backup dancer and friend Alex Welch in the face.

Demi continued: “I'm very good at manipulating people and that was something that I did in my disease, I would manipulate everyone around me.

"There were times I would just continue to lie, so that everything looked OK on the outside."

The Heart Attack singer, who's previously spoken about her eating disorder and self-harming problems, was checked into a treatment centre in 2010 to address "emotional and physical issues".

Her rep at the time stated about the then 19-year-old: "Demi has decided to take personal responsibility for her actions and seek help."

Demi's mum Dianna struggled with her daughter’s increasingly erratic behaviour, but believed her daughter’s problems weren’t as bad as they actually were.

Dianna told Access Hollywood: "It's like any other parent, when you see things, when you see signs you don't want to believe that's what's actually going on.

“So when they're telling you that's not what is going on... you want too badly believe them and I think for a long time I was in denial."

Demi eventually had a moment of clarity where she realised she was not only putting her career in jeopardy, but also her health.

"I was going to the airport and I had a Sprite bottle just filled with vodka and it was just nine in the morning and I was throwing up in the car and this was just to get on a plane and go back to LA to the sober living house that I was staying at.

"I had all the help in the world, but I didn't want it. When I hit that moment I was like, it's no longer fun when you're doing it alone," she said.

Now Demi is more successful that ever, guest starring on Glee, going on tour, still working on X Factor USA as a mentor, as well being a mentor to teens and young adults with mental health challenges.

She's also revealed plans to release a book titled Staying Strong: 365 Days a Year, as well as signed a deal to write a memoir, which is expected for release in 2014.

Do you think Demi was right to come clean about her dark past? Tweet us @sofeminineUK!