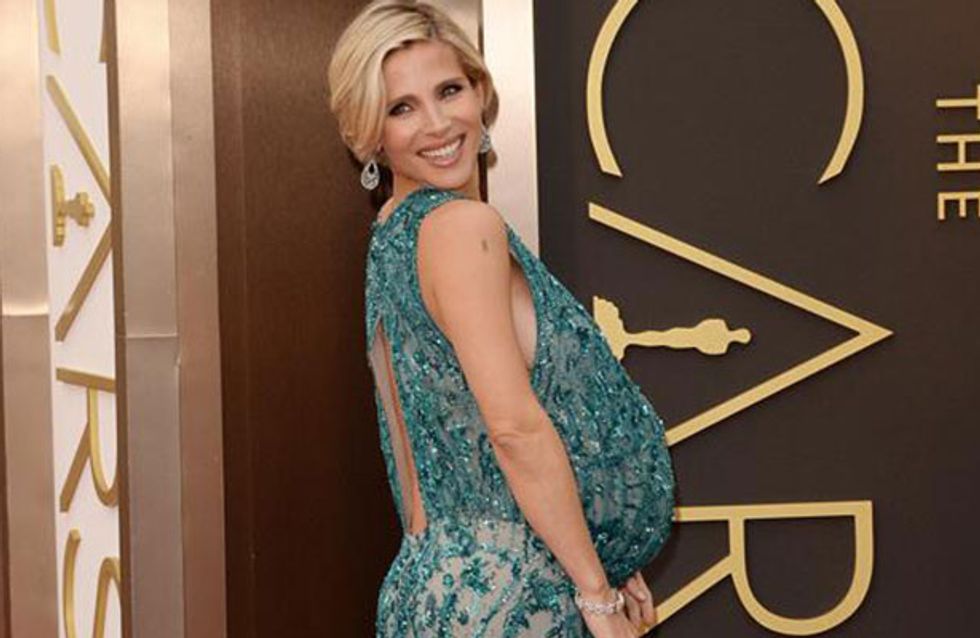 E!'s George Kotsiopoulos recently claimed he never shamed Elsa Pataky's body when he criticized her look at the 2014 Oscars. Celebs are taught not to fight back but sometimes we really wish they'd give these reporters what they deserve!

At this year's Oscars, Chris Hemsworth's wife, Elsa Pataky, walked the red carpet in a heavily beaded Elie Saab gown that hugged her large baby bump and riled up fashion critics. Pataky is having twins, so she's got a massive load to carry, and we can all assume that the gigantic Hemsworth probably doesn't make little babies.

Instead of applauding her confidence to get up there and show off her hot pregnant self, celebrity journalists mocked Pataky's style choice. During the Oscar red carpet broadcast, George Kotsiopoulos from E! Fashion Police was shocked by the actress' figure: "The last thing I wanna do is rip on a pregnant woman, but it's a horrible dress on her. It doesn't look like a baby bump, it looks like a beer belly."

Celebrities have to deal with a lot of rude remarks from reporters, but some of them have certainly stepped over the line!

Scarlett Johansson gets her boob squeezed

Professionalism went out the window when American designer Isaac Mizrahi, who was acting as a celeb reporter for the 2011 Golden Globes on E!, started manhandling Johansson's breast to her surprise. She politely laughs it off, but we hate that Mizrahi assumed he could abruptly fondle her just because he's gay. Rude!

Christina Hendricks demands to be an inspiration for ALL women

Christina Hendrick's voluptuous figure is discussed a lot in the media but we're sure she's tired of drawing attention to her body in every. single. interview. Australian fashion editor, Kate Waterhouse, was excited to interview Hendricks in 2012. As the ladies chatted, Waterhouse kept referring to Hendricks as an inspiration for "full-figured" women. Her word choice was not appreciated by Hendricks, who reportedly told her publicist that constantly calling her full-figured is just rude!

Perez Hilton is a reformed mean girl. He's vowed to never write terrible comments about celebrities again, but when he was in his prime, EVERYONE was on Hilton's radar. In 2009 Demi Moore got into a Twitter war with Hilton over a photo he posted of Moore's then 15-year-old daughter, Tallulah. Hilton called Demi's daughter a "slut" for having an unbuttoned shirt at a party. So vile.

U.S. Olympic skier, Bode Miller, had just won a bronze at the 2014 Sochi Games when he was interviewed by pushy NBC reporter, Christin Cooper. She congratulated him and then launched into questioning on his brother, Chelone, who died the year before. As Miller fell to the ground, overcome with emotion, Cooper continued to press him, asking "what’s going on there?” Well, he's crying. Christin. Maybe you should end the interview and back off now.

Rihanna doesn't want to talk about her love life

While promoting her film Battleship at a press junket in 2011, rumors about Rihanna and Ashton Kutcher were flying around gossip mags. A reporter named Sarah asked a completely unrelated question about Kutcher coming to visit Rihanna during the promo campaign, and the Diamonds in the Sky singer didn't hide her annoyance at the intrusion into her personal life.

Know of any other shocking celeb journo moments? Tweet us @sofeminineUK!